Saturday, 7 May 2016
Premier League
Aston Villa 0-0 Newcastle Utd
Ciaran Clark was booked for the seventh time this season, this was the Villa defender’s first booking since 1st March.

Bournemouth 1-1 West Bromwich Albion
Harry Arter was booked for the seventh time this season, his first booking since 13th February.

Championship
Blackburn 3-1 Reading
Josh Barrett made the first start of his career for Reading in this loss.

Cardiff 1-1 Birmingham City
Anthony Pilkington scored his tenth goal for Cardiff, more than two months after his last goal at the end of February.

Derby County 0-1 Ipswich
Adam McDonnell’s first league start for Ipswich (he started a League Cup game in August) was marred slightly by his first booking of his career!
David McGoldrick scored his fifth goal of the season, and his second in two games.

Hull City 5-1 Rotherham
Lee Frecklington’s fifth goal of the season (his first in a month) was the only consolation for Rotherham in this heavy loss to Hull.

League 2
AFC Wimbledon 1-0 Newport Co.
Ryan Sweeney’s started this afternoon for AFC Wimbledon was his first appearance for the Dons since the end of March.

Bristol Rovers 2-1 Dagenham and Redbridge
Jack Connors came off the bench at half time for his first appearance since 9th January.

Oxford United 3-0 Wycombe Wanderers
In his fiftieth appearance of the season, Callum O’Dowda scored his tenth goal of the season.

Portsmouth 1-2 Northampton
Brian Murphy made his twenty-fifth appearance for Porthsmouth.
After signing for Pompey on loan in March, Conor Wilkinson made his first appearance for them, this was also his 25th appearance of the season that’s included loan spells at Barnsley and Newport County
James Collins came off the bench late on to score the winner – his 15th goal of the season that includes eight for parent club Shrewsbury.

Sunday, 8 May 2016
Premier League
Tottenham 1-2 Southampton
Shane Long was booked for the third time this season, having not been booked before this game since 9th January.

League 1
Bury 3-2 Southend United
David Mooney scored his eighth of the season, his first goal since mid February, and also received his first booking this year – his last booking came on 28 December.

Gillingham 1-2 Millwall
Aiden O’Brien scored his 15th goal for Millwall (his 10th in the league this season) in his 50th start for the club.
John Egan scored his tenth goal in League One.

Port Vale 0-5 Walsall
Sam Foley made his fiftieth appearance of the season, all for Port Vale.
The second goal of Anthony Forde’s brace (the first of his career) was his fifth goal of the season

Sheffield United 0-2 Scunthorpe
Paddy Madden scored his 70th goal since moving to England in his 51st appearance this season!

Wigan 1-4 Barnsley
Conor Hourihane scored his 25th goal for Barnsley in his 50th appearance of the season.
Chris McCann was sent off for the second time in his career (both for Wigan), two and a half years after his last red card in December 2013.

MLS
LA Galaxy 4-2 New England Revolution
Robbie Keane marked his return to the LA Galaxy side with his fourth goal in his last six games for the Galaxy. 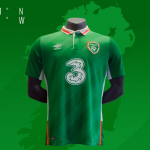