There was a flurry of goals in the snow at Oriel Park as Cork City beat Dundalk 4-2 in the President’s Cup.

The Leesiders plundered four second half goals to overturn a two goal deficit, ensuring early bragging rights over the Lilywhites ahead of the 2018/19 SSE Airtricity League campaign.

There was a minuteâ€™s silence before the game for former Cork midfielder Liam Miller, who tragically passed away this week at the age of 36.

Dundalk striker Ronan Murray â€“ who scored 17 goals for Galway United last season – bagged a brace in the first half as Stephen Kennyâ€™s side entered the break with a 2-0 lead.

The 26 year old striker fired home his first from 10 yards with his left foot, before lifting his second high into the net following a Dane Massey cross.

Jamie McGrath saw his fierce drive from 30 yards tipped over the bar, and Michael Duffyâ€™s drive also struck the post as the hosts dominated the first half.

There was a fitting and touching tribute to Liam Miller in the 23rd minute at Oriel Park, and his former club Cork City had a second half to remember in the snow.

John Caulfield made two changes at half time, with Karl Sheppard and Steven Beattie entering the fray in place of Jimmy Keohane and Colm Horgan.

The changes had their desired effect as the Irish champions soon turned the game around.

It took Sheppard just four minutes to find the net, sliding the ball under Gary Rogers and hurting himself in the process.

Summer signing Barry McNamee drew the Leesiders level with a header from a Kieran Sadlier cross around the hour mark.

Both sides had chances before Sadlier put Cork ahead with a stunning strike.

Graham Cummins â€“ who returned to the club last month â€“ scored the visitorsâ€™ fourth in the 82nd minute after another good cross by the impressive Sadlier, who scored the winning penalty in last season’s FAI Cup final.

Caulfield’s champions have now won six of the last seven meetings with Dundalk, and will enter the new season with fresh bragging rights. 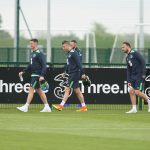