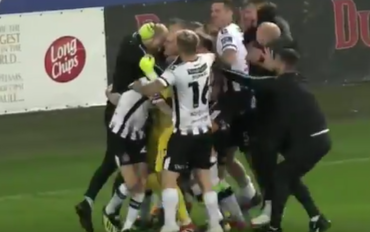 Dundalk have beaten Riga on penalties to reach the second round of Champions League qualifiers.

The Lilywhites beat the Latvian champions 5-4 on penalties following a scoreless stalemate after extra time.

Gary Rodgers saved two spot kicks in the shootout – another flew over the crossbar – with Sean Hoare keeping his cool to score the winning penalty in sudden death.

Dane Massey was the first Lilywhite to miss, with Georgie Kelly then missing the chance to knock Riga out with Dundalk’s fifth penalty.

Jamie McGrath showed good composure to keep the Irish champions in the competition in sudden death, before a Rodgers save and Hoare’s winner sparked jubilant scenes in the away end.

Dundalk will now face Qarabag in the second round of qualifiers.