The FAI have confirmed that the Republic of Ireland will host the USA on the second of June.

The boys in green will face their opponents at the Aviva Stadium, and the game will act as the final warm up game for the UEFA Nations League.

The international friendly will be included in the 2017/18 FAI Season Ticket package along with the November 15 friendly at home to Northern Ireland.

The nations have faced each other on nine previous occasions, with Martin O’Neill’s men running out as comfortable 4-1 winners on their last meeting in 2014.

The US have also missed out on a place at Russia 2018, and are currently ranked 25th in the world. 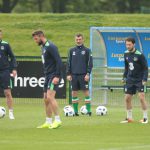