Wes Hoolahan has scored against Leeds in his last game for Norwich.

The 35-year-old was granted a guard of honour before the game at Carrow Road, and scored late in the first half to draw the Canaries level.

KalvinÂ Phillips had given the visitors the lead, but ‘Wessi’ fittingly provided an equalizer on the stroke of half time.

Hoolahan – who captains Norwich today – found the back of the net after his long-distance strike deflected on to the post and in.

It drew Norwich level, and was the former Republic of Ireland international’s 54th goal for the club.

It was announced this week that Hoolahan will leave the Canaries after 10 years at the club, and he has received a wonderful reception at Carrow Road today.

Can he sign off with another goal in the second half against Leeds? 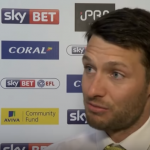