In his first start since October, Ryan Manning scored his first goal of the season

After signing for Yeovil in January, Shaun Donnellan made his debuts for the Glovers

Ryan Delaney was booked for the first time this season

Zachary Elbouzedi made his first appearance in the competition

Shaun Williams made his 300th start in English football

Liam Kelly scored his fifth goal in the Championship

Enda Stevens made his 50th appearance in the competition

Matt Doherty made his 200th appearance for Wolverhampton Wanderers

Stephen Dawson was booked for the fifth time this season

Richie Towell scored his fifth goal of the season

Graham Carey scored his first goal in a month, and was booked for the first time since December

Alan McCormack made his first appearance since Saturday, 16th September 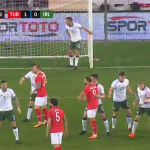