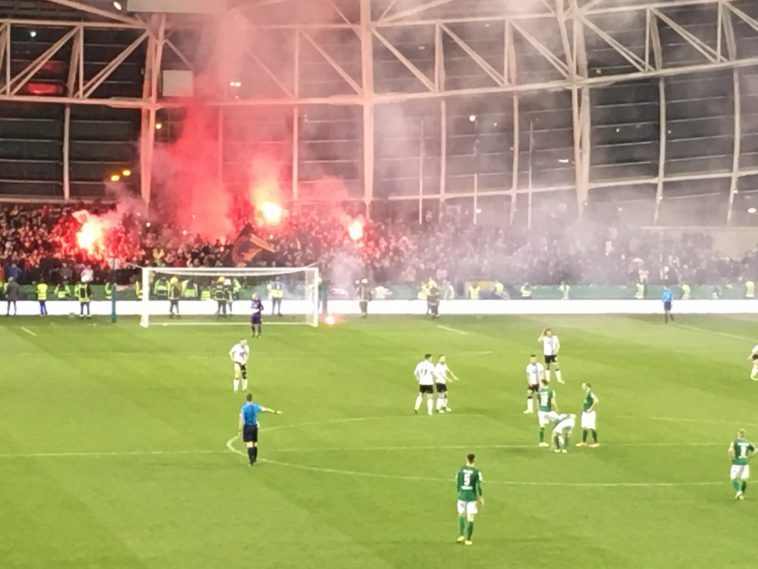 Cork City have sealed the domestic double by beating Dundalk 5-3 on penalties in the Irish Daily Mail FAI Cup final.

Kieran Sadlier scored the winning penalty at the Aviva after Michael Duffy missed Dundalk’s fourth spot-kick, in what was the third consecutive meeting between the sides in the cup final.

Both of the previous two finals between the rivals were decided by a single goal in extra time following a scoreless 90 minutes, and history almost repeated itself today.

Niclas Vemmelund had given the Lilywhites the lead with a fine header in the first half of extra time, but substituteÂ Achille Campion sent the game to penalties with a goal nine minutes from time.

There was a lively atmosphere, with both sets of fans lighting up flares in their respective ends, and the first half was full of end-to-end action.

Jamie McGrath tested Mark McNulty – who was jeered by the Dundalk fans throughout – with an early low drive, before Dundalk ‘keeper Gary Rogers cleared a goalward bound Karl Sheppard flick with his feet.

Rogers then produced a superb double-save in the 18th minute, first denying Dooley’s powerful strike, before reacting to claw Sheppard’s volley away.

Flares were thrown from the stands by both sets of supporters, and tempers caught flame on the pitch in the second half when Brian Gartland shouldered Mark McNulty, and a brief ruckus occurred in the Cork City box.

Dundalk were the better side in the second half, but Rogers was forced to pull off another sublime save after a Ryan Delaney flick deflected towards the Dundalk goal in the dying seconds.

For the third year in the row, the final headed to extra time.

Michael Duffy whipped in an excellent free-kick in the 95th minute, and Vemmelund rose highest in the box to power a header into the Cork net, sparking jubilant celebrations in the Dundalk end of the ground.

Dundalk entered half-time in extra time with a 1-0 lead, and Stephen Kenny brought on John Mountney for Patrick McEleney in an attempt to see the game out.

However, Sheppard picked out substitute Campion with a delightful lobbed through ball, and the striker took a touch before powering the ball through Rogers’ legs to draw the Leesiders level.

There were few more chances before the final whistle, though it was the league champions who looked the most likely to snatch a late winner.

The first seven penalties – taken into the Dundalk end (the North Stand) – were scored byÂ Sheppard, McMillan, Bolger, Oâ€™Donnell, Conor McCormack, Benson, and Beattie respectively, before Duffy’s effort was parried away by McNulty.

Sadlier then held his cool to fire Cork to their first domestic double, capping off a wonderful day for the city after the club also won the Women’s FAI Cup final 1-0 against UCD Waves.