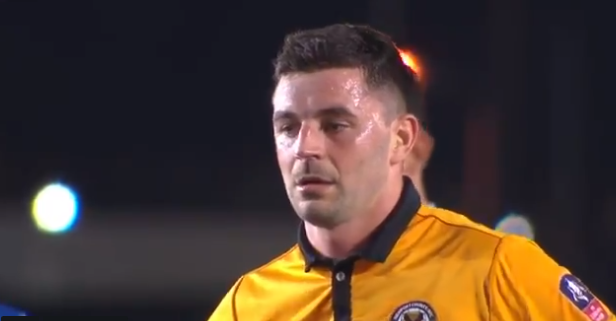 Newport County have stunned Leicester City in the FA Cup.

The League Two side have beaten the Foxes 2-1 at Rodney Parade to produce the biggest upset of the third round.

Carlow native PÃ¡draig Amond kept his cool to score the winner from the penalty spot in the 85th minute after Marc Albrighton handled the ball in the box.

The 30-year-old calmly rolled the ball down the middle and the hosts survived some late pressure from Leicester to see out a famous result.

Newport produced an inspired performance against Claude Puelâ€™s side â€“ who have beaten both Chelsea and Manchester City in recent weeks â€“ and took the lead in just the 10th minute.

Jamille Matt climbed above Wes Morgan to head home via the post after brilliant work by Robbie Willmott on the wing, sparking delirious scenes in the home end in front of the 6,705 strong crowd.

It was the Jamaican strikerâ€™s fifth goal in six FA Cup starts since November 2016.

Marc Albrighton saw his shot deflected over eight minutes later, before Danny Ward made a smart stop in the 20th minute to deny Dolan after a clever corner from Newport.

Michael Flynnâ€™s side looked dangerous on the attack, with winger Antoine Semenyo in particular catching the eye.

Matt almost doubled the home sideâ€™s lead on the half hour mark after brilliant work from Amond, but Ward reacted quickly to smother the danger.

Shinji Okazaki was then denied by Mickey Demetriou five minutes before half time, and the home fans chanted â€œPremier League, youâ€™re having a laughâ€ as Newport saw out their lead to half time.

Okazaki was replaced by James Maddison at half time as Puel tried to change the momentum of the game, but the League Two side continued to frustrate their Premier League opponents.

Albrightonâ€™s excellent effort cannoned off the crossbar in the 54th minute as the Foxes upped their intensity, and Demarai Gray replaced Danny Simpson before the hour mark as the visitors desperately sought an equalizer.

It finally came in the 82nd minute.

Kelechi Iheanacho teed up Maddison in the box, and Rachid Ghezzal was on hand to fire home the rebound after Maddisonâ€™s strike was parried by Joe Day.

Newport defender Vashon Neufvilleâ€™s cross connected with Albrightonâ€™s high and flailing arm inside the area, and the referee didnâ€™t hesitate before pointing to the spot.

🔥 | It’s heating up at Rodney Parade as @NewportCounty regain the lead pic.twitter.com/BFoEZ5a1Wo

Irish striker Amond, who has now scored in every round of this yearâ€™s competition, casually rolled the ball past Ward to restore Newportâ€™s lead from 12 yards.

Newport â€“ who are 14th in Englandâ€™s fourth division â€“ survived four tense minutes of stoppage time to knock a top flight team out of the FA Cup for the first time since January 1964.

â€œI played with Danny Ward at Morecambe, he faced a few of my penalties in training so I was hoping he wouldnâ€™t remember.

â€œItâ€™s brilliant to score the winner but just to win is the big one. Everyoneâ€™s done brilliantly today and I think we fully deserved it.â€

He almost helped the club produce a huge FA Cup upset last season, heading the League Two side ahead against Spurs in a game which eventually finished 1-1.

The striker â€“ who represented the Boys in Green four times at U21 level â€“ finished as Newportâ€™s top scorer last season with 14 goals.