Aitor Karanka resigned from the post last week, and former Republic of Ireland manager O’Neill is expected to replace the Spaniard.

According to Sky Sports, negotiations are expected to be concluded in the next 24 hours.

O’NeillÂ is a club hero at Forest, having won two European Cups as a playerÂ with the Championship club under Brian Clough.

In total, the 66-year-old made 371 appearances for the Nottingham team.

Forest are currently ninth in the Championship, just four points adrift of the play-off places. However, they have won just one of their last seven league matches.

OwnerÂ Evangelos Marinakis will reportedly make a sizeable transfer budget available to the incoming manager, and has allegedly been impressed with O’Neill having met with him in the last 48 hours. 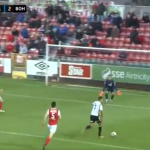