Michael Obafemi made his Premier League debut for Southampton today.

The 18-year-old started up front for the Saints in the 2-2 draw against Manchester United at St. Maryâ€™s.

Obafemi looked lively in early stages, and had an early shot blocked in the box after a clever one-two with Nathan Redmond.

Southampton took the lead in just the 12th minute through Stuart Armstrong, and Obafemi played a key role in the goal.

The Republic of Ireland international showed good vision and composure to find Armstrong in the box, and the Scottish international produced a brilliant low drive past David de Gea.

Cedric Soares then doubled the hostsâ€™ lead seven minutes later with a stunning free kick, but Mark Hughesâ€™ side didnâ€™t stay ahead for long.

Romelu Lukaku ended his 12-game goal drought in the 33rd minute after being played through by Marcus Rashford.

Rashford turned provider again six minutes later, pulling the ball back to Ander Herrara in the box, and the Spanish midfielder flicked the ball past a helpless Alex McCarthy from close range.

Unfortunately, Obafemiâ€™s day ended prematurely after the teenager picked up a hamstring injury.

The striker was largely feeding off scraps after Unitedâ€™s first half equalizer, but used the ball well whenever he was brought into play.

He appeared to damage his hamstring just after the hour mark after cutting inside at pace and playing a pass down the channel to Nathan Redmond.

Obafemi pulled up, but still had time to be involved in a tame penalty shout before being replaced in the 63rd minute.

It was an unfortunate end to an excellent week for the youngster, which also saw him start the Saintsâ€™ League Cup clash against Leicester earlier this week. 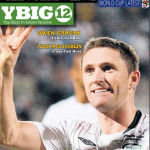