James McClean has hit out at the Irish media after last night’s 3-1 win over Moldova.

The West Brom winger scored a six minute second half brace to seal the win for Martin O’Neill’s team, but he feels the Irish media are too hard on the boys in green. Shane Long gave Ireland the lead after just 2 minutes, but Shane Duffy’s defensive lapse led to a stoppage time equalizer for the hosts.

McClean scored twice in the second half to spare Ireland’s blushes, but he made his feelings towards the media clear after the game.

Speaking to Sky Sports after the game in Chisinau, heÂ said;

The Irish press, especially, they need to have a reality check. We are not going to blow teams away, we know that. We’ve always been a team that works hard. Winning has never been enough.

Itâ€™s a bit frustrating. Look, our fans are brilliant. Through thick and thin, they travel everywhere home and away and support us and they are amazing.

I have always been one of those people… a win no matter what, no matter how it comes… that’s just me.

We have seven points after three games. People see Georgia and Moldova as write-offs, they’re not. There is no such thing as that anymore, especially in international football.

Despite not hitting top form, Ireland sit second in Group D after three matches, behind Serbia on goal difference.

Next up for the boys in green is a trip to Vienna to face Austria on November 12th. 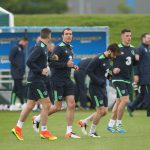