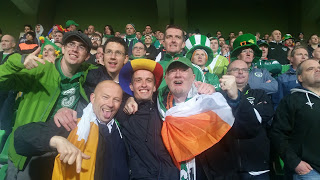 Martin O’Neill has named his 25-man squad for the World Cup qualifying games against Georgia and Serbia, and Sean Maguire has missed out.

Jeff Hendrick, James McCarthy, and Kieran Westwood miss out through injury, but Jon Walters has been included despite missing Burnleyâ€™s draw with Tottenham at the weekend due to an ankle complaint.

Thereâ€™s no place for Scott Hogan or Kevin Doyle in the panel, with Walters, Long, McGoldrick and Murphy chosen as the four strikers in the squad.

The squad will depart for Tbilisi on Thursday for the Group D qualifier against Georgia, before hosting Serbia in a crucial clash at the Aviva on September 5th.

The boys in green enter the double header second in Group D behind Serbia on goal difference, and Robbie Brady says Ireland in a great position to qualify.

“The squad isnâ€™t feeling any pressure going into the games,” Brady told RTÃ‰ on Saturday.

“Weâ€™re still in a great position to top the group even after drawing with Austria compared with previous qualification campaigns so the whole squad knows whatâ€™s required of us.

“Iâ€™m excited for the Georgia and Serbia games and if we can get maximum points it will put us in a great position.

“I love going back and playing for Ireland, thereâ€™s a huge reward on offer for us if we can produce good performances in these last few games and qualify for the World Cup.”