Martin O’Neill has provided an injury update ahead of Ireland’s clashes with Georgia and Serbia.
The Republic of Ireland manager offered updates on the condition of Jon Walters, Jeff Hendrick and Eunan O’Kane.
Walters missed Burnley’s visit to Spurs on Sunday, and sat out training yesterday, but O’Neill says the striker has a chance of featuring in Ireland’s Group D qualifiers.

“Jon is always upbeat, which is great,” said O’Neill.

“If heÂ doesn’t train but declares himself fit I will be happy. He has done so in the past and done well.

“JonÂ has been brilliant for us. He’s great around the place and is a fantastic member of the squad.”

“Jon is an important player in the dressing room. A leader. Fingers crossed, he is fit,” Roy Keane added at today’s press conference.

“Sean Maguire was probably unlucky to miss out,” he conceded. “He needs to get his head down and score some goals at Preston.”

O’Neill also revealed that Jeff Hendrick might recover from injury in time to face Serbia at the Aviva, but confirmed that Eunan O’Kane will miss out.

“Jeff hasn’t ruled himself out of the Serbia game. The Saturday game [against Georgia] might come too early for him, but if he’s feeling half decent during the week he might put himself forward. We’ll see how that goes.

“Eunan O’Kane came in to be assessed but unfortunately has been ruled out with an injury.”

The 65 year old, who yesterday announced his 25-man squad,Â also talked up the importance of the game against Georgia inÂ Tbilisi.

“The first game is the most important for us,” he continued.

“It’s really important for us to try and come away with something from the game. We’ll prepare ourselves for Serbia after that, and only after that.

“I think [Georgia] have a number of really decent players.

“They caused us all sorts of problems in the first half of our game but then they did the same to Wales and, in fairness, took the lead against Serbia and missed a decent chance to make it 2-0 so it will be a tough game for us.”

Assistant manager Keane is also expecting a tough challenge in Georgia.
“We’ve played Georgia several times over the last few years and it has always been tough. We’re positive though,” he said.
“I don’t want any players picking up daft cards but you’ve got to be up for it. Focus on Saturday, it’s like a normal week.”
1
SHARES
FacebookTwitter
SubscribePinterestGoogle 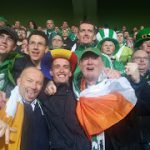