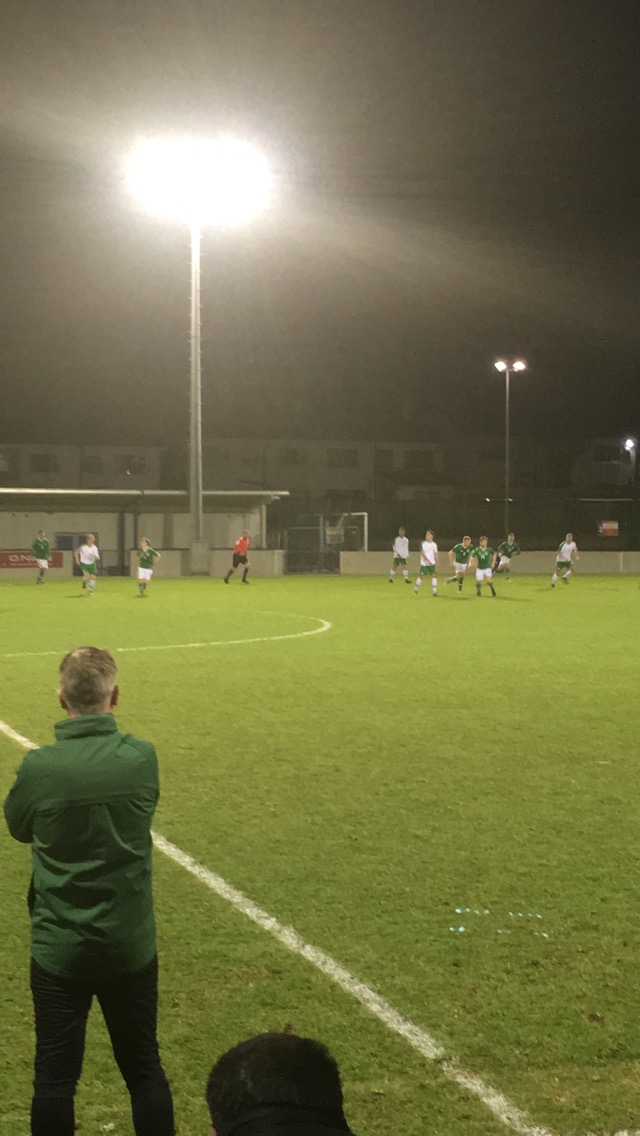 Brandon Kavanagh scored the only goal of the game for the Boys in Green against the resilient Amateur side in Whitehall.

The Shamrock Rovers star converted the impressive Neil Farrugia’s cross in the 32nd minute to open the scoring, and Ireland had plenty of chances to add to their tally.

Aaron Bolger – who was signed by Cardiff City on loan from Shamrock Rovers – also started in midfield which contained the energetic Zach Elbouzedi (Waterford).

UCD’s Conor Kearns started between the posts for Ireland, and Cork City starlet Conor McCarthy was joined by UCD’s Liam Scales in the centre of the Ireland defence, with Andy Lyons (Bohemians) and the busy Trevor Clarke (Shamrock Rovers) operating at right and left back respectively.

Farrugia – who proved to be a constant menace on the left – offered support to striker Aaron Drinan (Ipswich Town) along with Kavanagh.

The Champions League anthem bizarrely heralded the players as they made their way on to the pitch before kick-off.

Stephen McGann fired over an early shot for the Amateurs,  with Ireland’s Kavanagh then forcing Rockmount goalkeeper Brendan Oâ€™Connell into the first save of the game.

Liam Brady – brother of senior international Robbie – skied a free-kick from 25 yards after Shane Stritch was fouled for Gerry Davis’ side.

Ireland began to dictate the half as it wore on, and eventually broke the deadlock shortly after the half hour mark.

Farrugia did well to cut back a low cross from the byline, and Kavanagh made no mistake from close range.

The Amateurs nearly drew level before the interval through a sweetly struck volley from Paul Murphy, but Ireland goalkeeper Conor Kearns was well positioned to tip the rasping drive over the bar.

Both sides exhausted their respective benches after the interval as the relentless rain intensified.

Substitute Robbie McCourt struck the post after being picked out brilliantly by Elbouzedi, and Kavanagh’s goal-bound rebound was eventually well blocked.

McCourt saw another shot whistle past the post after another pas by Elbouzedi, as the Amateurs pushed for a late equalizer.

Lively substitute Colm Carney stung Kearns’ hands with a searching drive from 25 yards, before also glancing a header wive from a set piece.

Kenny described the match as a “useful encounter” afterwards.â€œIt was a good couple of days,â€ the Dubliner claimed.
â€œYouâ€™re putting together a team of players who donâ€™t know each other in two days.

â€œSome of them had played 90 minutes for their clubs on Saturday. You have to factor all these things into account, but I thought it was a very useful exercise. Itâ€™s a whole new staff who donâ€™t know each other either â€“ for us it was great to get a few days working together to iron out things that we needed to iron out.

â€œThe players I felt showed a brilliant attitude over the three days and I enjoyed working with them. Some players excelled more than others, and thatâ€™s the way you want it.â€

The former Dundalk manager also admitted he is unsure how many of last night’s squad will be involved in March’s Euro 2020 qualifier against Luxembourg.

â€œThere is a squad announcement in March,” he said, in quotes reported by The Mirror.

“The question was would there be one or two players from here or six or seven that are in the squad.

â€œThatâ€™s all in the balance still. We got a closer look at the mentality of the players and how they trained. It gives them a closer look.

â€œYou might think you know the players from their clubs but you donâ€™t. Because theyâ€™re 1998’s and only made the breakthrough last season and some were in and out of teams.

â€œAnd I was managing myself so I didnâ€™t see much of them, so it was good to see them.â€