When a footballer makes his name in the Premier League, it means he is not just a good footballer, he is an exceptional one! Wolverhampton Wanderersâ€™ Irish international Matt Doherty is one such exceptional footballer. Doherty, however, did not just find himself playing at the highest level in world football, he went through a lot before he became the player he is today.

A bit like lotto online Doherty’s professional football career started at Bohemians in 2009, and he would never have expected to be hitting the footballing lotto equivalent 10 years later as a Premier League star. Before that, Matt had played youth football for Belvedere and Home Farm in Dublin. At Bohemians, he was viewed as â€˜one for the futureâ€™. His place with the team was with the youth sides where a young Doherty proved his mettle and a year later after joining Bohemians, he was selected as one of the few youngsters to be taken on a preseason tour.

He grabbed the opportunity with both hands impressing his manager and as well as opposition managers. One such opposition manager who was impressed by the young Matt was then Wolves manager, Mick McCarthy who decided to sign the young man. In the summer of 2010, he signed his first contract with Wolves.

When Matt signed for Wolves in 2010, the club was in the Championship. Matt spent the first year at the club but in 2012, he was sent out on loan to Hibernian in order to get first team experience and game time. His loan spell at Hibs was successful as he managed to feature 13 times while chipping in with two goals. Still thinking that he had more to learn, Wolves decided to send him on another loan at the start of the 2012/13 season to Bury. At Bury, Matt featured 17 times scoring one goal.

When he returned to Wolves in 2013 (his loan deal to Bury was cut short after financial challenges forced Bury to return all loaned players to their parent clubs), his return coincided with the arrival of a new manager in Kenny Jackett. The new manager saw immense talent in him and decided to put him in his first 11. Realising that he was a key component of the new managerâ€™s plans, Matt extended his contract.

Matt repaid the faith shown in him by Jackett as he cemented his place as Wolves right back (and at times right wing back). After the departure of Jackett in 2016, Matt had already become a key player in the Wolves team and he became the first choice right back/wing back for successive Wolves managers from Walter Zenga, Paul Lambert to the current manager, Nuno EspÃ­rito Santo.

Under the tutelage of Nuno EspÃ­rito Santo, Doherty has established himself not only as the best ring wing back in the Wolves squad but also arguably in the Premier League. He has played all 25 Premier League games thus far appearing in one of those as a substitute. He has also chipped in with three goals. Based on his impressive performances this season, Matt is one of the frontrunners for the Wolves Player of the Season award, and maybe heâ€™ll make the Premier League team of the year too.

Despite his remarkable rise he rarely got a sniff of games for the Ireland team under Martin Oâ€™Neill. Under Mick McCarthy, itâ€™s expected that Doherty will finally get a run in the Irish team, which may, surprisingly be at the expense of Seamus Coleman, who up until his leg break was Irelandâ€™s top level player. How things change. 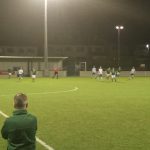