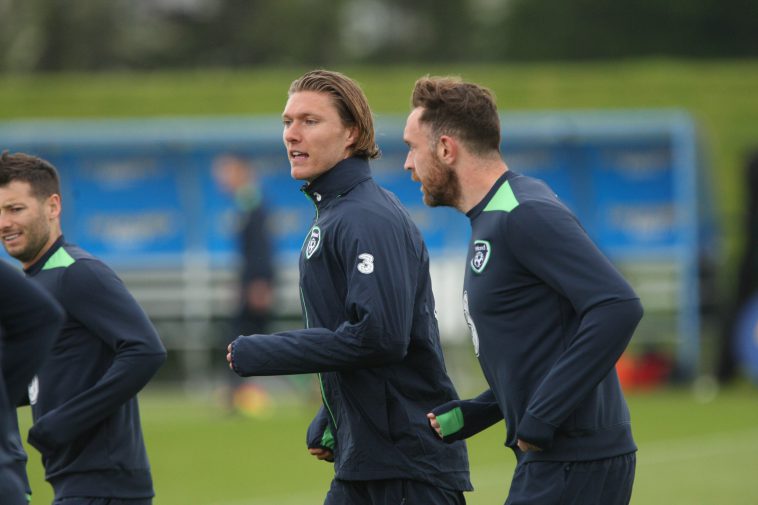 Republic of Ireland international Jeff Hendrick marked his home debut for Burnley last night with his first ever Premier League goal. Ben Smith discusses his rise from the streets of Dublin to the top of the English game.

Jeff Hendrick caught the eye last summer with a string of high quality performances for Ireland at the European Championships, but before impressing for the boys in green Hendrick was far from a household name.

His performances in the Euros earned him a move to the top tier of English football, becoming Burnleyâ€™s record signing and the fifth most expensive Irish footballer of all time in the process.

He was chased by a number of Premier League clubs and even Turkish giants Galatasaray were rumoured to be looking at the young Dubliner, but in the end he opted for a move to Burnley upon the advice of fellow Irishman Stephen Ward, who is also plying his trade with the Lancashire outfit.

At just 24 years of age, many will be surprised to learn that Hendrick is just shy of 200 appearances as a professional. He has also amassed 27 caps for Ireland, and registered his first international goal against Serbia earlier this month.

It has been a cataclysmic rise to the top for this young Dub, there is no doubt about it. When asked about his big money move to the Premier League he replied â€œIt is where I had planned to be after the summer Iâ€™ve had.â€

That is the aura that Hendrick emits, grounded but highly motivated.Â  It is this motivation and inner strength that has pushed him this far, overcoming adversity and a career threatening condition to become the player that he is today.

The youngest of five boys, Jeffrey can recall his father Billy bringing him to a field near their home in Artane where from the age of 11, he would work tirelessly at his running technique and agility. He says his father was a hugely positive influence on him during these formative years.

“He knew that I could do something with football so he wanted me to work hard and not waste the opportunity I hadâ€ Hendrick noted when speaking to the Irish Independent in January 2014.

Hendrick was playing for the famed St. Kevinâ€™s Boys football club in Whitehall, a club that has also produced the likes of Liam Brady, Damien Duff, Ian Harte, and more recently Robbie Brady. At age twelve he went for trials with Manchester United and also with Celtic, the latter of whom took him to a tournament in Qatar which marked the opening of the world renowned Aspire Academy.

This event was attended by both Pele and Maradona, and Billy Hendrick still has a picture of Jeff and the other Celtic academy players posing with both legends of the game.

Young Jeffrey was fanatical about sport. He not only played football but also Gaelic games and he represented Dublin at inter-county level in his early teens. â€œI was with Dublin for a year or two but it used to clash with football and they’d go mad when I wouldn’t show up to gamesâ€.

Jeffreyâ€™s obsession with sport soon led to him developing Osgood-Schlatter syndrome, a condition which can affect very active teenagers. This is basically a severe inflammation ofÂ  the kneecap, which can be extremely painful and debilitating.

Hendrick can recall trials in which he was unable to perform due to the intense pain he was feeling in his legs. He had a number of unsuccessful trials in England before he finally ended up at Derby Countyâ€™s youth academy in 2008 at the age of 16.

From here Hendrick developed and honed his skills with the youth team and reserves before breaking into the senior squad in 2010. From then on he became an ever-present in the Derby team and made 196 appearances for the club, scoring 22 goals.

Hendrick has certainly earned his right to play in Englandâ€™s top tier. If he continues to put in eye-catching performances like the one against Watford it will not be long before Englandâ€™s elite clubs take notice.

At the tender age of 24 he has his best years all ahead of him, and if he can continue progressing in the same manner as he has thus far, he may well become the Republic of Irelandâ€™s most prized asset.

This weekend Jeff will hope to make his 200th professional appearance against Arsenal. This is just the beginningâ€¦