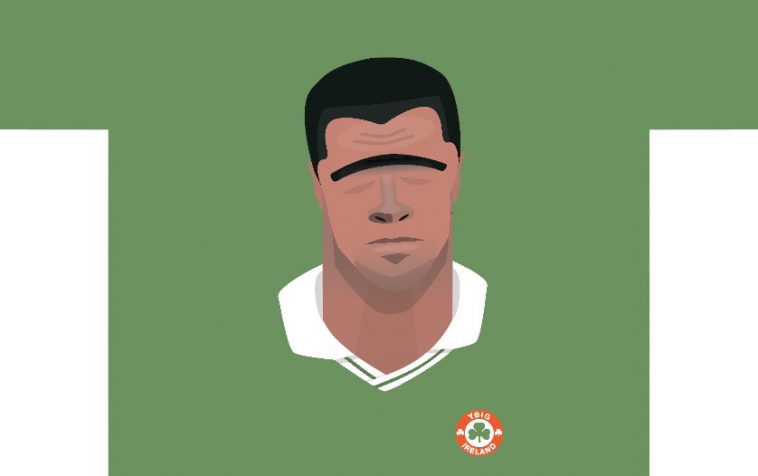 Irish football is going through a transitional phase as a new era is underway for the side under Mick McCarthy, but times have certainly been good in the past and could potentially return in the future especially with Stephen Kenny’s work on the under 21s.

Ireland has produced some magnificent footballers over the years. There is hope that the next crop coming through can step up and, frankly, it has to. We’ve have had over 10 years of rubbish backward football, enough is enough.

A couple of years in football can see drastic changes being implemented and under Mick McCarthy, and Kenny as the next manager, the new breed – when they arrive further onto the scene – will surely be given more of a chance. If Ireland are to recreate their past glories and keep producing the talented footballers of the past, then McCarthy needs to blood them in. It’s that simple.

For now though, as the talent is fairly sparse, we felt the need to take a look back through the archives and reminisce about the good old days, and the days when Ireland were producing fantastic players on a regular basis. So, without further ado, here’s a look at some of best players to pull on an Ireland shirt.

Probably most famous for having Roberto Baggio is his pocket, Paul McGrath was a beautifully gifted player who was accomplished at both centre-half and centre-midfield, but mainly occupied the midfield area during his International days. Widely considered to be one of the greatest Irish players of all time, McGrath suffered with a few personal issues off the pitch, but on it he was as tough as they come, worked hard, got stuck in and really led by example. They don’t make them like Paul McGrath these days, that’s for sure, and the Aston Villa fans still call him ‘god’.

We had to include ‘Keano’, right? Certainly a polarising figure, Roy Keane is still widely considered to be Ireland’s best ever player and despite a few issues during his career – namely with now Ireland boss McCarthy – his talent shone above anything else. If you were going to war then you’d want Roy Keane leading the troops, that’s for sure. Keane was tough, had the will to win and was an extremely accomplished midfield enforcer, but also a tidy player on the ball too. He had few weaknesses, if any, really. He was voted Ireland’s best ever player for a reason and without him, Manchester United wouldn’t have done what they did and Irish football just wouldn’t be the same.

Damien Duff. Wow. In his peak, what a winger he was. During his days at Chelsea before the Premier League became a sanitised, money-dominated division and fans weren’t struggling to put down their mobile phones to take selfies, play arcade games that are suitable for Irish players or talk to their mates via WhatsApp, football was booming and the Blues were too under Jose Mourinho. On his day – even harking back to his early days at Blackburn – Duff had the beating of any defender in the land. He won lots of silverware, was integral for both club and country, and surely goes down in history as one of Ireland’s best ever players, especially wide players anyway.

Please Ireland, it’s time for the next batch coming through to step up. Your country needs you!