Shane Long made his 25th appearance of the season

John O’Shea was booked for this first time since November

Jay O’Shea scored his first goal since Saturday, 14 October
Jack Byrne was booked for the tenth time this season

Chris Forrester made his 100th appearance in League One

James Berrett scored his first goal of the season, 11 months after his last goal in April 2017

Charles Dunne was booked for the first time since November

Aaron McCarey made his first appearance since Sunday, 28 January 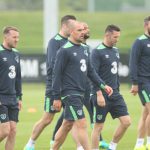