Michael Obafemi returned from injury for his first appearance since February

Stephen Ward’s start, his first since January, was his 400th appearance in English football

Sean Maguire scored his first goal of the season

Alex Pearce unfortunately scored an OG in this game, his first since November 2014

Eoin Doyle made his 50th appearance for Bradford City

Connor Ronan was booked for the first time this season

Daryl Horgan scored his first goal of the season 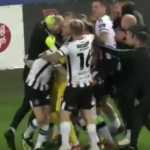