Burnley 2-2 West Bromwich Albion
Kevin Long’s first start in 2017 was also his first start in the Premier League and his 25th start for Burnley
Marc Wilson made his first appearance for West Bromwich Albion since signing for them on loan in January and was booked for the first time since September
The five Irish players who started this game (Long, Ward, Hendrick, Wilson, McClean) were the most to start a game in the Premier League this season, and the most since Whelan, Walters, Wilson, Gibson, McCarthy, and Coleman started Stoke V Everton in March 2015

Stevenage 0-3 Accrington Stanley
Seamus Conneely scored his first goal of the season, more than a year after his last goal on Tuesday, 19 April 2016

Huddersfield 0-3 Cardiff
On his 34th birthday, Brian Murphy made his first start since January

Norwich 4-0 QPR
Reece Grego Cox made his first appearance in the Championship, more than six months after his last appearance for QPR in October

Rotherham 1-1 Derby County
Lee Frecklington scored his first goal of the season, a year to the day after his last goal on Saturday, 7 May 2016 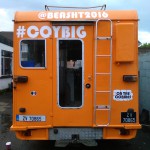