Austria 0-1 Republic of Ireland
This was Ireland’s first win in Austria, the first time the Boys in Green have beaten them since 1963(the longest winless streak against any opponent) and the first time beating higher ranked opposition in an away qualifier since a 2-1 victory against Lithuania in 1997.

Shane Duffy continued his record of starting in each appearance for Ireland, and was booked for the first time in his Ireland career.

Seamus Coleman made his 40th start for Ireland.
James McClean’s winner was the winger’s eighth goal for Ireland.
Both Harry Arter and David McGoldrick made their first competitive appearance for Ireland in their fourth and fifth senior appearances, respectively.

Wes Hoolahan made his 37th appearance for Ireland, this was Hoolahan’s 36th cap while signed to Norwich City, breaking Mark Bowen’s record of 35 caps for Wales while playing for the Canaries.

Bradford City 4-0 Rochdale
Billy Clarke made his 100th appearance for Bradford
Niall Canavan had not been sent off in his career before this season, but after this game, he has now been sent off twice in two months 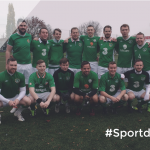