AFC Wimbledon 2-2 Fleetwood
Cian Bolger scored his first goal in League One, this was the defender’s fifth goal of his career

Bury 2-3 Millwall
Aiden O’Brien was booked for the first time this season, 11 months after his last booking on 26th December

Chesterfield 3-2 Bristol Rovers
Jay O’Shea scored his 50th goal of his career in England. and has now scored six goals in his last six games

Gillingham 3-0 Rochdale
Mark Byrne scored his first goal in League One, three months after his last goal on August 23rd

Colchester 4-0 Crewe Alexandra
Owen Garvan scored his first goal of the season, this was his first goal since October 2015 and the 25th goal of his career

Dundee 2-1 Inverness CT
Darren O’Dea was booked for the fifth time this season and is suspended for the next game. 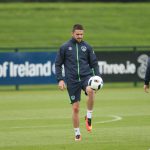