The first episode of the 2018/19 season concluded with a poignant tribute to the former Republic of Ireland international, who sadly passed away at the age of just 36 earlier this month.

Introduced by host Peter Collins, the video contained commentary and footage of Miller at both club and international level, and featured his stunning goal against Sweden for the boys in green.

You can watch it below.

On this evening’s show, we paid tribute to the late Liam Miller pic.twitter.com/JvQ8m6CFsm 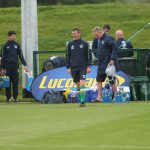