Michal Kucharczyk’s wonder strike sealed a crucial away win for the Polish champions in the first leg of the Champions League first-round qualifier at Turner’s Cross.

The Poland international scored a stunning strike from 30 yards with just 11 minutes remaining, and Legia held on to take a one goal advantage back to Warsaw for next week’s return leg.

Former Republic of Ireland international Damien Delaney made his competitive debut for the Leesiders, who made four changes from last week’s 0-0 draw with Shamrock Rovers.

The home side – aided by the home crowd – felt their way into the game, and McNamee missed a great chance to fire Cork ahead in the 13th minute.

Legia dominated possession, and created several chances as the first half wore on.

Graham Cummins was introduced in the second half, but squandered a decent opportunity after being played through by McNamee.

The visitors cranked up the pressure in the second half, forcing Cork to defend deep in their own half.

The Polish double-winners broke the deadlock in the 79th minute.

Krzysztof Maczynski played a free kick short to the unmarked Kucharczyk, who produced an exquisite curling shot, which flew into the top corner past Cherrie.

“Weâ€™re bitterly disappointed how the game went,” he said.

“The game went exactly as we thought it would. We did a tremendous amount of work on their team.

“Legia are a fantastic team. Their manager says they can go to the Champions League group stages, so that shows the level they are at.

“With 10, 15 minutes gone in the game and we had a chance from 10 yards out and unfortunately for Barry, he just scuffed it and didnâ€™t connect properly.

“Over the course of the 80 minutes, if someone told you that you were going to get three or four chances, you are saying you have to take them. Moral victories are no good.” 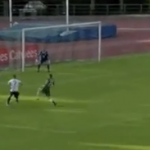