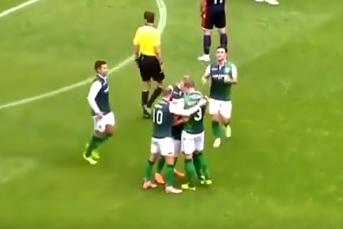 Daryl Horgan’s first goal for Hibernian was a screamer.

The former Dundalk winner scored a late winner as Hibs beat Ross County 3-2 in dramatic fashion in the League Cup.

Horgan provided the cross for Gray’s 15th minute header, and decided the game with a moment of magic.

The Republic of Ireland international cut inside before unleashing a brilliant strike into the bottom corner from 20 yards.

The dramatic victory sets up a home tie against Aberdeen in the quarter-final, and Lennon was delighted with Horgan’s contribution.

“Horgan lasted the 90 minutes and came up with a great goal and also had a great assist for Gray’s goal,” the Hibs manager said.

“I was delighted with his performance as well as the young lads like Ryan Porteuous who came through it very well.”

Horgan joined the Scottish club from Preston earlier this summer, and will be eager to build on his impressive start at the club.

â€œIt could have gone a bit better, there are some bits and pieces of the game that I have to work on and improve, but thatâ€™ll hopefully come with game time,â€ he told Hibs TV afterwards.

â€œBut Iâ€™m obviously delighted to get the win, and the goal, which is brilliant.â€