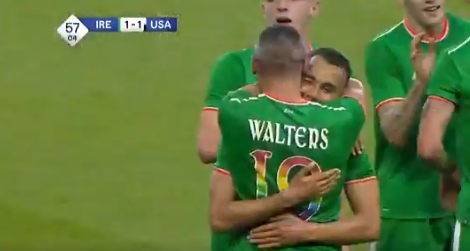 Graham Burke and Alan Judge have both scored their first international goals.

The Shamrock Rovers star scored Ireland’s equalizer in the 2-1 win over the USA at the Aviva.

Burke was making his first start for the Boys in Green, and turned home Darragh Lenihan’s goal bound shot from close range in the 57th minute.

The 24 year old was replaced by Daryl Horgan seconds after finding the back of the net, but looked sharp during his hour of action.

WATCH:@ShamrockRovers man Graham Burke bags his first International goal to make it 1-1 at the Aviva!

It’s probably the easiest goal he’s scored this season, but what a moment for the 24 year old!#IRLUSA #COYBIG #LOI pic.twitter.com/zi2sYRFjOd

The USA had taken the lead in the dying seconds of the first half after striker Bobby Wood finished from close range following some slack marking from a set piece.

However, substitute Alan Judge produced the winner with a powerful finish in the 90th minute, less than a minute after coming off the bench.

The Brentford winger smashed the ball past the USA ‘keeper after excellent work by James McClean.

Well deserved after all @10judgey has been through!#IRLUSA #COYBIG pic.twitter.com/wmo26Vm0HR

John O’Shea received a guard of honour before the game, and the veteran defender received a standing ovation when he was replaced by Darragh Lenihan in the 33rd minute.

Blackburn defender Lenihan became the first Meath man to represent the Republic of Ireland, and was unlucky to see a header ruled out for offside.

Both sides had chances throughout the game, and Martin O’Neill’s men produced a much improved showing following Monday’s 2-0 defeat to France in Paris.

O’Neill opted to start with three at the back, with O’Shea, Shane Duffy, and Kevin Long serving as the three centre halves in front of Colin Doyle.

Seamus Coleman and James McClean started as wing backs, with Jeff Hendrick and Declan Rice operating in the middle of the park. The impressive Calum O’Dowda and Burke played behind Jon Walters.

Look at that smile!

What a night for the Dubliner and all at @ShamrockRovers. pic.twitter.com/7cdBywCOcH 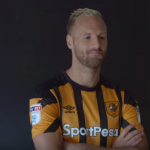