News broke this morning that former Dundalk and Ireland youth team manager SeÃ¡n McCaffrey has passed away at the age of 58.

McCaffrey replaced Brian Kerr as manager of the u-17 and u-19 international teams after Kerr’s promotion to the senior team, and led the boys in green to the 2008 U-17 European Championships in Turkey during his reign.

According to Indepedent.ie, over half of the Republic of Ireland players to feature against Denmark played under McCaffrey at some point.

The Monaghan native played a large part in the development of many young players who went on to ply their trade in the League of Ireland and abroad.

McCaffrey was also a founding member of Monaghan United, and managed the first team at just 23.

“It is with regret that Monaghan United has learned of the death of SeÃ¡n McCaffrey, former Monaghan United and National team manager. Funeral arrangements not yet known. Ar dheis dÃ© go raibh a anam,” a statement from the club read today.

Players, managers and journalists took to Twitter to pay tribute to SeÃ¡n.

Sean McCaffrey was an inspiration to hundreds of schoolboy footballers. He was my first coach, the first grown-up I wanted to be like and the man who suggested I try to get into sports journalism.
Heart-broken today at the news of his death.
Sleep well, SeÃ¡n. RIP.

The club is saddened to learn of the death of former #DundalkFC manager, SeÃ¡n McCaffrey. We offer our deepest condolences to SeÃ¡nâ€™s family and friends at this time. Ar dheis DÃ© go raibh a anam. pic.twitter.com/wblLtMH4Gu

Sad to hear of the passing of SeÃ¡n McCaffrey. Really enjoyed my brief time working with him in the underage levels. Was a lovely man. My thoughts and prayers are with his loved ones and friends at this sad time. RIP SeÃ¡n

So sad to hear of the passing of Sean McCaffrey. An absolute gentleman and brilliant manager who had a huge influence on my own development and that of many others. RIP Sean

Like all the best Irish football, the late Sean McCaffrey’s career in the FAI ended in an unfair dismissal case…badge of honour 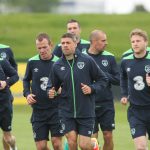