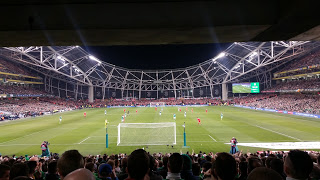 Declan Rice’s rise has been a steady one.

The former Chelsea youth, who qualifies for the Republic of Ireland through his grandparents, has shone for West Ham a underage level since joining the Hammers in 2014.

Expectations are high for Rice at the London club, and the 18 year old was presented with Dylan Tombides Award in recognition of his performances for the Academy at the end of the 2015/16 season.

Rice – a defender or defensive midfielder – was the captain of the West Ham u23 side last season at the age of 17, guiding the team to promotion, and ending the campaign with theÂ Young Hammer of the Year award.

In March, he was voted as Irelandâ€™s best player at u17 level. The combative midfielder also represents the u19 international side, and was called up to a training camp in La Manga for the u21s.

He was called up to Martin Oâ€™Neillâ€™s senior squad for Juneâ€™s matches against Uruguay, Mexico and Austria, and further international call-ups are sure to follow.

Rice made his Premier League debut as a substitute against Burnley in May – a month after signing a new long-term deal with the club – and further impressed Hammers boss Slaven Bilic during pre-season this summer.

He came off the bench at Old Trafford on the first day of the season on a difficult day for the Hammers, who were thumped 4-0 by Manchester United.

However, Slaven Bilic singled out Rice as one of the only positives from the demoralizing defeat.

â€œHe has done well in pre-season and we put him in for half an hour at Old Trafford. He deserved his chance and took it. He did not look overawed in any way, and although it was a difficult match for us, the experience will be invaluable to him.â€

Rice’s cameo earned him a start at St. Mary’s on Saturday in what proved to be a thrilling encounter against Southampton.

The Irish international started at the base of West Ham’s midfield alongside the experienced former Republic of Ireland target Mark Noble, and Rice impressed throughout, despite ending up on the losing side.

It was an ill-disciplined and unorganized performance from the visitors, but Rice cut a composed, solid figure on his first league start. His distribution was good, and the youngster looks a natural leader, unafraid to issue instructions to his senior teammates.

Rice received a standing ovation from the travelling supporters during his withdrawal after 75 minutes, and the versatile teenager did more than enough to justify his selection next weekend.

West Ham travel to Whaddon Road to face Cheltenham Town in the Carabao Cup on Wednesday evening, a game which is likely to afford Rice another opportunity to impress his Croatian boss.

The talented teen hasn’t been included in the Republic of Ireland provisional squad to face Georgia and Austria next month, but further international opportunities are sure to come knocking if Rice can become a Premier League regular for the Hammers.