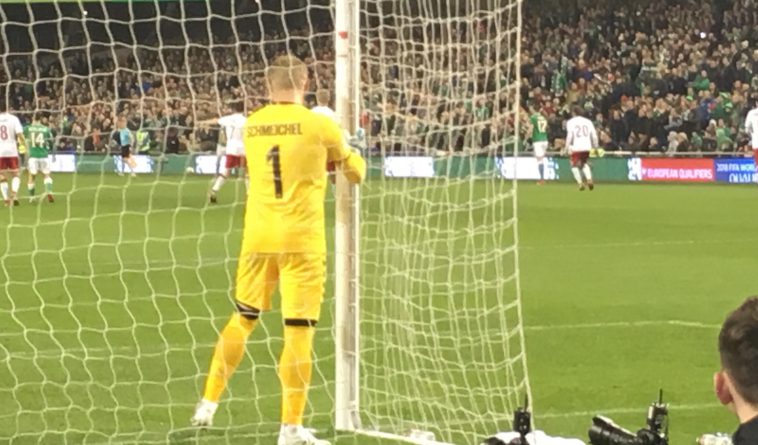 Kasper Schmeichel has paid tribute to the Irish fans after Denmark hammered the boys in green 5-1 at the Aviva.

The Danish goalkeeper professed his admiration for the Irish people, and says the ‘Fields of Athenry’ gave him goosebumps last night.

“I can only have admiration for the Irish as a nation,” he said after the game.
“When the fourth goal went in and the Irish fans started singing Fields of Athenry, it gave me goosebumps.”

“I remember sitting in Poland in 2012 watching when the Spain game and they were 4-0 down as well. It gave me goosebumps as well.

“I’m obviously delighted for Denmark but I’m gutted for the Irish. They are amazing fans and great people.

“But for us it has been a long time coming and tonight we showed what a good team we are.”

Â Shane Duffy headed Ireland ahead early on, butÂ Leicester City shot stopper Schmeichel said it was important for the Danes to keep their cool after falling behind.
“There was a long, long way to go. All we needed was one goal. Ireland were still under pressure so for us it was still a came of not panicking and we had that feeling we could create chances.Â We created chances at home and didnâ€™t put them away.”
The 28 year oldÂ also praised his counterpart Darren Randolph, who impressed in both legs.
“Darren Randolph, even today, had a great game, he is so unfortunate to be on the losing side.”
While many fans stuck by the Irish team throughout, a number of fans left the stadium early, much to the disgust to those who remained to cheer on the boys in green.
1
SHARES
FacebookTwitter
SubscribePinterestGoogle