Robbie Keane has training with Shamrock Rovers this week.

Irelandâ€™s all-time top goalscorer is a free agent since leaving LA Galaxy last year, and has been linked with a plethora of clubs across the world in recent months.

The 36 year old is maintaining his fitness at the Roadstone Sports Club at Kingswood, Dublin, but the Irish Independent say that a move to Rovers is unlikely. Two of Keaneâ€™s former teammates, Damien Duff (first-team coaching staff) and Stephen McPhail (sporting director) are currently working at the club.

The veteran striker has played for a host of clubs including Inter Milan, Leeds, Spurs, and Liverpool, but dismissed rumours of a move to Rovers several months ago. Keane also trained with Al-Ahli in Dubai recently, but that was also just to maintain fitness and sharpness.

Itâ€™s still unclear where the last chapter of Keaneâ€™s storied career will unfold.

RoversÂ lost their opening league match to Dundalk, but recovered to beat Bohemians last week, and will face Derry City this weekend. 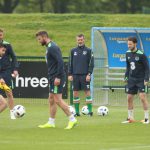 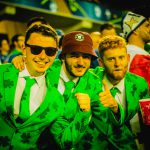