Robbie Brady was stretchered off with a serious looking injury in Burnley’s 1-0 defeat to Leicester yesterday.

The Republic of Ireland international had to be substituted after a heavy collision with Foxes centre back Harry Maguire in the first half, and was brought to hospital.

“It looks more serious than not serious to me; thatâ€™s all I can say,”Burnley manager SeanÂ Dyche toldÂ the club’s website.

“Heâ€™s gone off to hospital, so we need to find out more before I can give the full facts.

“Itâ€™s a blow because Robbie has been excellent lately. Heâ€™s a good character in the group and heâ€™s been building with his performances.”

Brady has appeared in all 15 of the Clarets’ Premier League matches this season, and scored a sublime goal in Wednesday’s 2-1 win over Bournemouth.

The 25 year old had been playing well up until his unfortunate injury, which he picked up after dancing into the box, before entering a heavy tackle with Maguire.

Burnley have been enjoying an excellent season thus far, and are currently seventh in the league behind Spurs on goal difference. 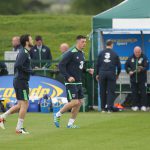