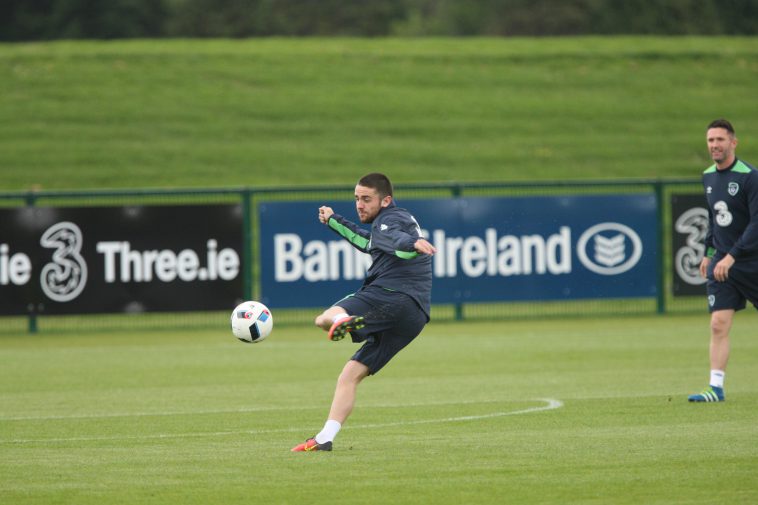 Sean Dyche handed the Dubliner his first start on the left wing for Chelsea’s visit to Turf Moor this afternoon, after his impressive cameo off the bench last week.

Brady may feel disappointed that he missed a tackle on Victor Moses in the buildup to Pedro’s opener for Chelsea after seven minutes, but the 25 year old atoned for any mistake with a sublime effort to draw Burnley level in the 24th minute.

It’s currently 1-1 at half time in what has been a hugely entertaining, end to end Premier League clash. The Clarets have lost every Premier League game they’ve fallen 1-0 behind in this season, but responded well to Chelsea’s early lead and more than held their own in the first half.

Matt Lowton was denied by Courtois from close range in the 36th minute, and the home side could easily be 2-1 up at the break.

It’s been a great weekend for Irish players in Britain, with Wes Hoolahan, Daryl Horgan and Aiden McGeady all finding the back of the net yesterday.

Needless to say, Brady’s stunning strike caused quite a stir on Twitter…

That Robbie Brady free-kick 👌as Jamie Carragher put it in commentary “Courtois didn’t even smell it!” pic.twitter.com/3MenO0hIeG

WHAT a FREE-KICK from Robbie Brady on his full Burnley debut! Fantastic strike to cancel out Pedro’s opener #BURCHE #Burnley #Ireland

📸 What a sensational goal from Robbie Brady to put Burnley level! #BURCHE pic.twitter.com/khNkPRLOl0

1 – Robbie Brady is the first player to score a direct free-kick vs Chelsea in the PL since Rickie Lambert in March 2013. Stunner.