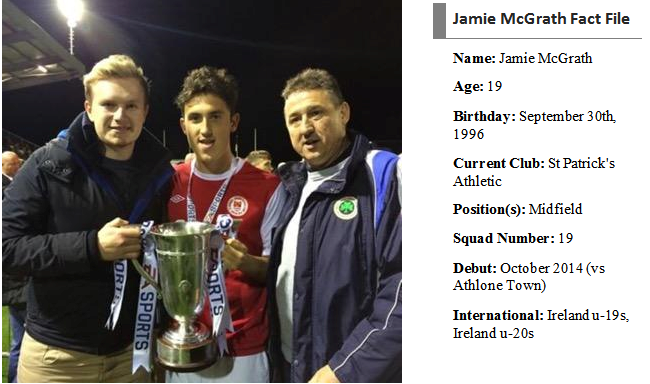 This article originally appeared on seasonticketsite.com

Jamie McGrath was only 7 or 8 years old the first time I saw him play, but his talent was abundantly clear even then.Â

Playing for his local side Athboy Celtic in a seven-a-side competition known as ‘The Super 7’s,’ it was clear that Jamie was head and shoulders above most other players on display.

Now, years later, Jamie continues to impress all who watch him.

He has represented Ireland at several age groups, and heÂ made his debut for St. Patrick’s Athletic against Athlone Town in October 2014.

HeÂ hasn’t looked back since.

In an interview with Off the Ball, Â St. Pat’s skipper Â Ger O’Brien said of Jamie;

“I’d liken him to [Chris] Forrester. When Chris came in to Bohs at 17, 18 and you stood back and realised, this is not just like playing against anybody; this fella has got something.”

JamieÂ signed a new deal with the club for the 2015 season, and went on to make 23Â league appearances, scoring twice in wins over Drogheda United and Sligo Rovers, as St Pats finished fourth in the Premier Division, and also won the EA Sports Cup.

Injury has kept JamieÂ sidelined for the early partÂ of this season, but the 19 year old is now fit again.Â HeÂ produced a goal, an assist, and a man of the match performance last monthÂ in the 3-1 EA Sports Cup semi-final victory over Shamrock Rovers, and is ready to kick on;

â€œNow that the shin splints are finally gone, I aim to hopefully retain my place in the team like I managed to do last season, and hopefully add more goals to my game than last year. I think if I achieve these two goals I will be happy, but also to win another piece of silverware, as a player that’s what everyone wants at the end of the day!â€

Jamie saysÂ that Forrester and Demarai Gray – who has just won a Premier League medal with Leicester – are the best players he has played with (For those of you wondering, he said that Manchester United’sÂ Andreas Pereira is the best player he has faced).

Jamie is currently studying Business &Â Management in Maynooth. He is about to sit his second year summerÂ exams, and admits that it can be tricky to balance college work with the demands of Airtricity football;

“I must admit it is difficult to balance both as I train most mornings with Pats and miss a lot of lecture time. You are always kind of playing catch up. When it’sÂ coming into exam time it just so happens we have aÂ  lot of Â fixtures, and the cramming that is normally so essential is made even harder but I won’t complain! IÂ  have somehow managed to pass all my college exams so far so I hope it will continue!”

Irish sport site 42.ie recently earmarked Jamie as a player who could eventually succeed in English football, but the Meath man isn’t getting carried away.

I asked him whether seeing players like Chris Forrester do so well in England makes him dream of doing so himself, and he said;

“Yeah Chris is doing remarkably well and it’s great to see! Seeing a former team mate do so well makes you naturally dream about going over, but obviously Chris is a very very good player and did some unbelievableÂ  stuff in this league, so that’s what I’m aiming to do, and hopefully maybe someday follow in his footsteps, but at the moment I’m very happy where I am.”

Jamie is just 19, and certainly has time on his side.

His feet are firmly on the ground, but the sky could be the limit for St. Pat’s’ Â creative midfielder. 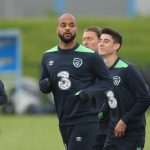