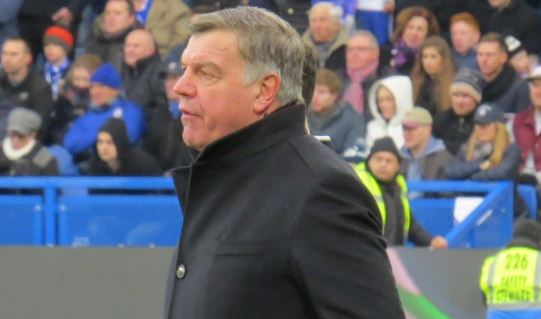 This article was originally published on Pog Mo Gol

At his first press conference as England head coach, Sam Allardyce referred to his first management job at the helm of Limerick in the League of Ireland. Travelling the country in a mini-bus with Father Joe Young, Allardyce not only led the ShannonsidersÂ to promotion, but he had started out on the road to Wembley and one of the biggest jobs in world football. Cian Manning looks back.

The start of October 2015 saw Sam Allardyce appointed manager at Sunderland AFC with a familiar raison dâ€™Ãªtre: Premier League survival. His ninth outright job as a club manager had taken him from the banks of the Tyne to the Wear with spells in Lancashire and London. Less than a year later, and â€˜Big Samâ€™ now takes the reins at the FA as England manager, but it was in Ireland where it all began.

Allardyceâ€™s time at the Stadium of Light was a story that had come full circle. The media has continually flaunted that he wasÂ the first man to have managed both Newcastle United and the Black Cats, yet his coaching career started at Wearside as head of Youth Development.

A two year spell in the midlands at West Bromwich Albion as assistant to Brian Talbot saw the club dip into the relegation spots for the then Third Division, a league which they had never inhabited. With little chance of employment in England, an opportunity was afforded to him across the Irish Sea on the west coast. Limerick City (now Limerick F.C.) for the 1991/92 season would not only prove to be a fruitful learning ground but also a springboard for future success. When approached by the club chairman he recollects: “I thought somebody was taking the mickey.”

Allardyce was saddled with the twin aims of seeking promotion to the Premier Division of the League of Ireland but also maintaining the very existence of the club. This was made all the more difficult when a player revolt arose early on in his reign, which was as quickly quashed.Â Ahead of kick-off of his first game in charge, one Limerick striker arrived twenty minutes before the match, over an hour later than designated with Allardyce issuing the adage that if you donâ€™t show up on time you â€œdonâ€™t playâ€.

Preparation for games would see Big Sam and the clubâ€™s chairman, a man of the cloth, Father Joe Young traversing the streets of Limerick for benefactors to cover the playersâ€™ wages, while evenings before match day were spent scouting the local night clubs with particular attention turned to Brazen Head, making sure players were on their best behaviour.

Such were the financial problems at the club, who played their home games at Rathbone (where matchesÂ had to be heldÂ at two oâ€™clock due to lack of floodlights which doesnâ€™t help the rain-soaked image Frank McCourt has portrayed of the city), that Allardyce would travel from his home in England to Limerick in the latter half of the week and stay with the clubâ€™s assistant Billy Kinnane in his house.

â€œWatching Joe, with his faith, was a massive eye-opener for me,â€ Allardyce recently remarked in an interview with The Telegraph. â€œHe looked after one of the poorest parishes in Limerick, working with people who were struggling, down and out, but it never got him down. We had a brilliant time together. We travelled all over the country in a little minibus, playing games and winning.â€

All these challenges did not stop the player/manager achieving the First Division title and promotion to the Premier Division, but also a good playing season for himself. As a centre-back for the club he made twenty-three appearances scoring on three occasions. His only season in the League of Ireland would see him replaced by Father Young, who led Limerick to League Cup success the following campaign.

His reputation most certainly enhanced, Allardyce became assistant manager to Les Chapman at Preston North End before spells at Blackpool and Notts County saw him return as first team manager to Bolton Wanderers. At the Trotters he achieved great success, leading the club to UEFA Cup football and to the cusp of qualification for the Champions League. Though often criticised for the negative style of play of his teams, Allardyce has been something of a coaching visionary known forÂ being the first manager to use ProZone before it was subsequently utilised to great effect by England Rugby World Cup winning coach Clive Woodward.

If Allardyceâ€™s story came full circle with the return to Sunderland, the same could be said of his former club Limerick, who miraculously staved off automatic relegation to the First Division last season only to drop via a heart-breaking play-off defeat.
Having gone their first twenty-one league games without a single victory and rooted to the bottom of the table things looked ominous; a return to the second tier looked a certainty from where Big Sam had guided them from nearly a quarter of a century ago. While the subsequent play-off lossÂ to Finn Harps did send Limerick through the trap-door, they will return at the first time of asking, with 17 wins from 18 and no defeats, they are the runaway leaders of the First Division this season.

Many things have changed in the intervening years, now playing under the moniker of Limerick F.C., donning blue and white, the boost of a return to their spiritual home of Market Fields looked set to be dampened by relegation last season. However, such has been the rise of the â€˜Super Bluesâ€™ that their 3-2 victory over Sligo Rovers in their final league game last yearÂ was seen by rugby coach Anthony Foley as a contributing factor for the sparse 7200 attendance at Thomond Park for the Munster-Ulster Pro-12 fixture.

Often soccer has played second or even third fiddle to a city in love with the oval ballÂ and Gaelic Games. Their current revival could inspire a new generation to follow in the steps of former internationals like Al Finucane or Steve Finnan. With a Premier Division return and plans for their own state-of-the-art training complex, the future looks bright for Limerick F.C. with a young squad now in the habit of winning, and winning big games under pressure.

Now in charge of England, in fact Allardyce is not the first Limerick bossÂ Â to go on to international management. As a player-manager,Â Eoin HandÂ guided them to the League of IrelandÂ championship in 1980, leading to a plum European draw with Real Madrid, and he was subsequently appointed to the Irish job. Allardyce will hope for better luck than his Shannonside predecessor in his quest to make the World Cup in Russia. Handâ€™s Ireland cruely missed out on the finals in Spain in â€™82 on goal difference.

â€œIâ€™ve been a success at every club Iâ€™ve been at, starting with Limerick FC, by the way,â€ Allardyce told the mediaÂ in his first press conference as Three LionsÂ boss. Itâ€™s been a long journey to here for both Big Sam and Limerick but both are looking to a future of bigger and brighter things.Â No doubt they will wishÂ each other every success, just as they enjoyed together on the highways and byways of Irish football.