Martin O’Neill has revealed what he expects from Callum Robinson.

The Preston attacker has been included in the Republic of Ireland provisional squad to face Wales and Poland, and has been cleared to play competitively for the Boys in Green.

“His paperwork has gone through to represent us competitively,” O’Neill said.

“I saw him recently against Norwich. He is a nice footballer. I will be encouraging him to take players on. This is what I want Robinson to do.”

Robinson – who’s grandmother was born in Monaghan – declared his intention to represent Ireland earlier this year, and has been included in recent squads.

The 23-year-old made his unofficial debut inÂ Scott Brownâ€™s testimonial against Celtic back in May, and will be eager to get some competitive minutes under his belt.

Injuries to Sean Maguire and Scott Hogan could open up an opportunity for Robinson to impress in next month’s matches.

His club teammates Graham Burke and Alan Browne have also been included in the provisional squad.

The final squad will be announced on September 3rd. 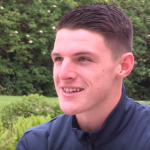