The Martin O’Neill saga has taken another twist.

O’Neill seemed set to take over as manager of Stoke City, but rejected the move, and the Potters have since appointed Paul Lambert.

However, it has emerged that the Republic of Ireland manager is “allowed to speak to Premier League clubs”.

Luke Edwards (The Telegraph) says the FAI knew about Stoke’s approach, and that they “have been kept in the loop from the beginning”.

“He spoke to them and turned them down,” Edwards said.
“A lot of it is genuinely to do that he enjoys his job with Ireland.

“The fact is if Stoke had spoken to him earlier in the week and it had been more clear cut then he could have been more open with the FAI about it all.

“He was aware of Stoke’s interest and there had been preliminary talks. But in his own he decided he was staying with Ireland. Stoke made a renewed attempt over the weekend.”
Edwards also claims that O’Neill was offered increased wages by the Premier League outfit, but the former Celtic manager decided Stoke was not the place for him, for reasons unknown. O’Neill refused to comment on the speculation when he attended the Soccer Writer’s awards ceremony in Dublin last week alongside Roy Keane.
“He was offered a substantial pay rise to take the Stoke job,” Edwards revealed.
“I don’t think it was a short-term deal on offer either. Martin is his own man, difficult to second guess and he just decided it wasn’t for him for whatever reason. We’re going to have to wait for him to explain that,” he said.

“My understanding is the FAI knew about it over the weekend.

“They were aware there was an approach from Stoke and my understanding is under the terms of his contract, whether it is signed or not, he is allowed to speak to Premier League clubs if they are interested in him as long he notifies the FAI. They have been kept in the loop from the beginning.”
2
SHARES
FacebookTwitter
SubscribePinterestGoogle 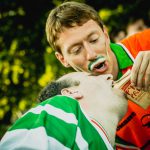