David McGoldrick was booked for the first time in 2017

After signing for Sheffield United on loan, Jay O’Shea made his first start for the Blades against Bristol

Keith Keane was booked for the fifth time this season

Ian Lawlor was booked for the first time this season, this was the goalkeeper’s first yellow card in more than a year

Mark Connolly made his 100th start for Crawley, spread across two spells with the reds

Liam McAlinden was booked for the first time in 2017

Eoin Doyle scored his first goal for Portsmouth, more than two months after his last goal on December 3rd

Jake Carroll made his 100th start in England
After returning from injury following a year out, Barry Corr scored his first goal since December 2015 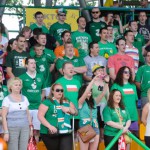