James McClean has reiterated his desire to finish his career at Derry City.
The Republic of Ireland international’s brother Patrick swapped Waterford United for Sligo Rovers yesterday, and James says “it would be nice to kick” his brother in Ireland’s top flight.
“Thatâ€™s the plan, thatâ€™s not going to go away, thatâ€™s always the plan,” McClean said at theÂ Neymar Jrâ€™s Five launch, in quotes reported by RTÃ‰ Sport.

“I was always planning on moving back home as soon as I finish up.

“If Iâ€™m still fit and ready and theyâ€™re willing to take me that would be nice and it would be good to kick my brother too. That would be an added bonus.”

The West Brom winger also spoke about Derry’s prospects this season, and called the decision to install a 4G pitch as madness.

“I hope Derry City win every game this season apart from four, I hope they lose four to Sligo because obviously family comes first,” the 28 year old continued.

“Itâ€™s great up there at the moment, theyâ€™ve got the whole new stadium and itâ€™s looking the part.

“Being away from the Brandywell last season wasnâ€™t ideal, the only disappointment is they put in a 4G pitch which I think is just madness. Â Iâ€™m old school, I believe football should be played on grass and thatâ€™s it.”

The Candystripes lost to newly promoted Waterford United on the opening day of the 2018/19 SSE Airtricity League season, and McClean feels the club’s new signings will have to gel quickly.

“It was obviously disappointing for Derry to lose their first game at Waterford but they brought on a lot of players so for Derry to have a good season those players are going to have to gel pretty quickly.

“I donâ€™t really know too much about the new players they brought in so I canâ€™t really judge how theyâ€™re going to fare this season but like I said, I hope they have a good season with just the five defeats, obviously have lost the one already.” 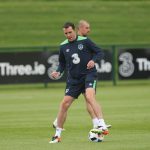