James McClean has failed to show up for West Brom’s pre-season trip to Scotland.

The Republic of Ireland international has been strongly linked with a move to Stoke City, and is the third Baggies player to fail to show up for pre-season.

“James McClean has failed to report without permission and will now face internal disciplinary proceedings,” the club said on their website.

McClean will likely face a fine for his indiscipline, and it seems unlikely that the winger will be a West Brom player when the Championship season kicks off.

James McClean is set to be fined by the Baggies after failing to travel on the club’s training camp in Scotland. Is the third player to do this summer after Ben Foster and Craig Dawson. #wba 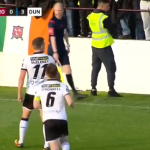