James McClean is a major doubt for Saturday’s crucial clash with Austria.

The West Brom winger is struggling with a back injury, and may miss out in Vienna, according to Roy Keane.

The Irish management are awaiting the results of a scan on a setback that the Derry native picked up while doing some fitness work at West Brom.

“It’s not good. I never like when I hear players in around the back area,” Keane said.

“It’s not a good area. If you said to me he got a kick on his knee or his ankle, that’s fine. But tweaks in backs. I don’t like the sound of it.

“Apparently, he was doing some work at his club – he was suspended for the weekend and lads sometimes go in and do a bit extra.

“I suppose the plus was he didn’t get injured on our watch so we can’t get blame for it.”

McClean would represent a big loss for Ireland. He produced two goals in the boys in green’s 3-1 win in Moldova last time out.

James McCrthy has also been ruled out of the World Cup qualifier, and Harry Arter is poised to replace the Everton man in midfield.

Stephen Ward is also unavailable at left back, which means Robbie Brady is likely to drop back into defence. 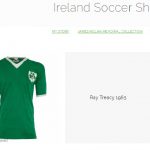