Martin O’Neill claims he doesn’t know where he’ll be when Euro 2020 comes around.

“Who knows?” he replied when asked about the tournament at the launch of Dublin’s Euro 2020 logo yesterday.

The Ireland manager also suggested that his assistant Roy Keane could be boss by then.

“What about Roy Keane taking over for that campaign?” he continued.

“Who knows? Genuinely, did I say that before? Anything is possible. Do I think that Roy could go on and manage? I’ve said it all the time, yeah.”

John Delaney also revealed that the FAI aren’t thinking beyond the important visit of Wales in March.

O’Neill also ruled out the possibility of Robbie Keane replacing one of his coaching staff, but suggested that the door is always open for the 36 year old.

“I would have no problem bringing him in if he was around to do it. At this minute, I wouldn’t bring Robbie in at the expense of one of my coaches.

“I don’t think that would be wildly fair. But I would have no problem with him being around the place for anything he needs from us.

“But I’m sure he can plough his own career in a coaching capacity. I think the way he is going on, he’ll be strong-minded enough to go his own way.” 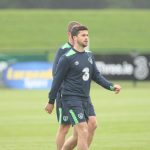