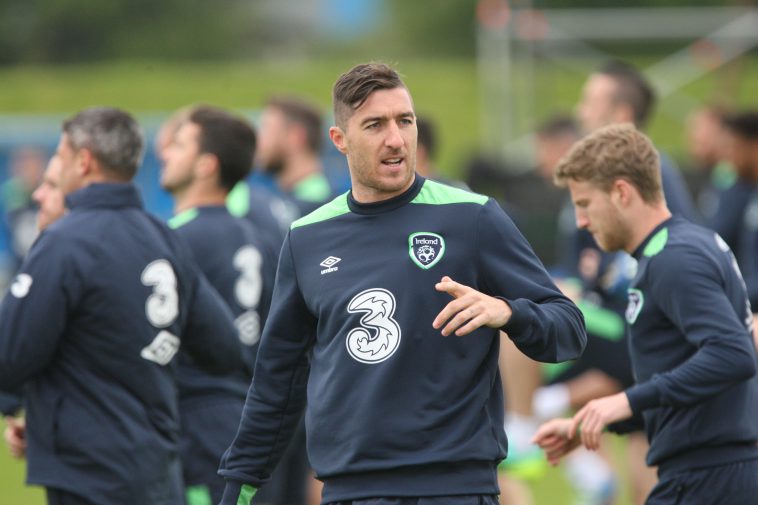 Things are going from bad to worse in the Republic of Ireland camp.

An audio clip has surfaced today which was allegedly recorded by Stephen Ward, which discusses the row between Roy Keane and Harry Arter.

The clip also goes into detail about Keane’s heated argument with Jon Walters, and casts the Republic of Ireland assistant manager in a poor light.

Martin O’Neill was asked about the recording in today’s press conference, and seemed to confirm the authenticity of the leaked message.

“First of all, I don’t think that Stephen [Ward] was there,” the Republic of Ireland manager said.

“Stephen wasn’t actually there. He was just picking up on things; something that we talked about at the beginning of the week. Probably not anything more really to report.”

It is unclear what the leak will mean for Ward’s international future.

The Burnley left back won his 50th cap in Cardiff last week, but has returned to the Clarets for treatment on a foot injury, and will now find himself in an awkward position.

Here it is in full.

O’Neill has claimed that Walters is “fine” after the altercation, and the veteran striker did play in the humbling 4-1 defeat to Wales last week.

“Harry is perhaps not so fine.

“But I said to you before, you would have to ask whether that is the complete reason why Harry is not participating in these games this time.

“I think you probably know that anyway, because Harry has let that be known to a few people anyway, on the reasons that he has decided not to come.”

The Irish manager also revealed that he had an altercation with David Meyler – who was present for the press conference – on Friday, and has taken responsibility for Keane’s criticism of players.

“First of all the incidents took place at the end of May,” he stated.

“They have surfaced months later. It’s not the first altercation between players and staff. I had one with the man beside me on Friday (David Meyler) and he took it on board.

“Sometimes I think the game has changed. Players need to go out and prove the management wrong. If you’re asking about Roy’s criticism of players, this is my responsibility. I will take full responsibility of anything that goes on.”

The Boys in Green take on Poland in an international friendly tomorrow night.

It was also confirmed today that captain Seamus Coleman has withdrawn from the squad due to injury.