‘It’s never a dull moment with Irish football’ but even that has been pushed to the limits of plausibility of the past week, and within the context of the year we have just had, since the disgraced John Delaney was found out to actually be the worst thing to happen to Irish football.

Last week the Ireland manager Mick McCarthy met with the FAI and he stood aside to let Stephen Kenny take over as Ireland manager. With McCarthy’s contract due to end in July, and with Kenny lined up to take over after Euro 2020, the fai were left in the surreal situation of having two managers, a bizarre over inflated contract, two postponed Euro 2020 play offs, a mountain of debt, a government bailout, a fixture pile up with no known dates, possibly playing future games in Lansdowne Road with no fans and sure you can throw in Robbie Keane’s unknown but highly paid role in for good measure.

But on the plus side, Ireland fans have finally gotten their wish. A manager who doesn’t want to play hoof ball.

In Kenny’s first media interview with RTE last week (you wouldn’t know it from the disgracefully bad quality of it) he said.

“I just didn’t like that some people had that opinion that it was in our DNA to play long ball and that our players had these characteristics to play in a more direct way. I disagreed with that fundamentally and I still continue to disagree with it.”

We have had Mick McCarthy 2s, Martin O’Neill’s and Giovanni Trapattoni’s versions of the Long Ball spanning a whole 12 years. It has been very painful at times to be an Ireland fan, to have flown across Europe and watch us not play, because that is the only word for some of our worst performances – which may have brought us back the precious point – but ultimately left you feeling underwhelmed and depressed that successive managers believed that that was the best way to get a result, by not playing football.

Of course there is merits to the argument we haven’t had many great squads or players over the years, and of course there will always be times when any old result will do, it’s just when it become the de facto mode, as if there is was no other way. 12 years of it!!

Whether Kenny can be a success is neither here nor there, what he plans to do and how he plans to achieve it is what is most important. If the new Fai, can buy into Kenny’s plans (and there is no reason to think otherwise) the blueprint for the future of Irish football can finally embrace the modern world of football and we will never again have to watch competent and able footballers try and hack a ball as fall away as they can hit it.

“I would like schoolboy and academy teams throughout the country to look at the senior international and think ‘that’s how we want to play’. That is my dream.”

This dream needs time, at least two campaigns, it needs to be able to fail in some games, it needs to be accepted we may not qualify in either campaign. The short term fix managerial appointment of the past is no more, the long term plan is crucial.

The coronavirus is making fools of any forward planning with fixture dates set to change again and again and possibly again in the middle of a qualifying campaign. All we know is that at some point they will be played, and for Kenny’s and Ireland’s sake let us hope we get lucky and he can get to play some Nations League games before we play Slovakia in the Euro 2021 play off.

For those of us who are looking forward to betting again, you can get free betting tips here and we can start backing Kenny’s Green Army to win, lose or draw playing the right way, a way that in the future will be known and respected as the Irish way, the Kenny Way. The future’s bright for Ireland fans. By god It’s been a long time coming. 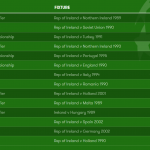