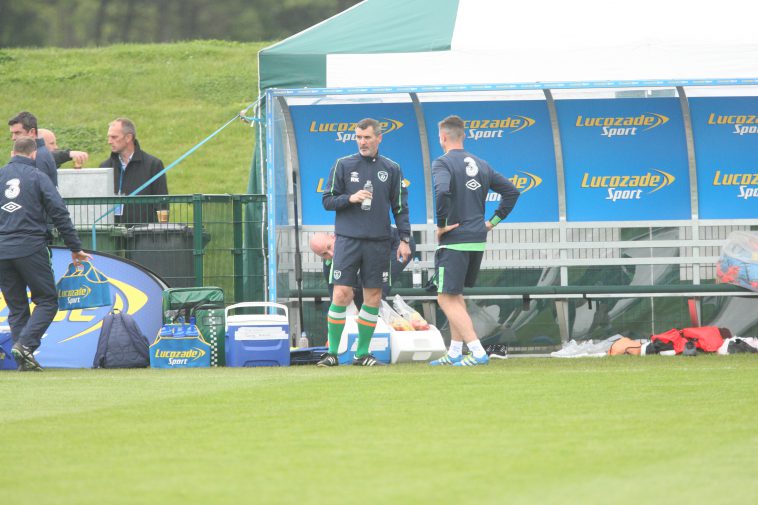 Keane was responding to the Aston Villa striker’s claims that he was star-struck when he met the former Manchester United midfielder for the first time.

“Listen, that will soon change,” Keane replied when asked about Hogan’s comments.

“After a week working with me, that will soon change. He’ll wish I’d never met him. That’s what most people say after a week.

“No, it’s nice to have him in and involved. The fact that he is a United fan is irrelevant. He’s now an Irish player and we are glad to have him on board.”

“I suppose there is research ongoing with regard to concussion. If you’re worried about the physical side of any sport, then play chess. It’s part of the game, whether it’s hurling or American Football.

â€œYou see the rugby lads. When you cross the line, there is an element of risk involved. They all want to play but know the risk. I’m sure there is research. But there is a chance you might get hurt. It is part of the game.

â€œI was surprised when I read about it. He was involved in provisional squads. It’s sad, he feels he made the right decisions.

â€œHe’s a decent guy and did well for Ireland. He’s 34, felt he had a decent innings and maybe this is the right time. Health is your wealth as they say.

Roy also discussedÂ James McCarthy’s ongoing injury issues, and aimed a jibe in the direction of the Everton medical team. Ronald Koeman has engaged in a war of words with the Irish management team in the past over the combative midfielder,Â who is training with Ireland in a bid to be fit for the visit of Moldova on Friday.
“James seems to be getting a lot of injuries at Everton, so I don’t think we’ve anything to worry about in terms of how much we push James,” Keane claimed.

“To be fair, the medical staff are overseeing all of it and they’re in contact with Everton and all their scientists. I think they’ve more scientists involved now than there needs to be.

“Then he can go back to Everton and we’ll see how their scientists deal with it because he seems to be picking up a number of injuries at Everton.

“I said it the last time, I always think clubs, as much as they look at what we’re doing, they certainly have to have a look at what they’re doing themselves.”