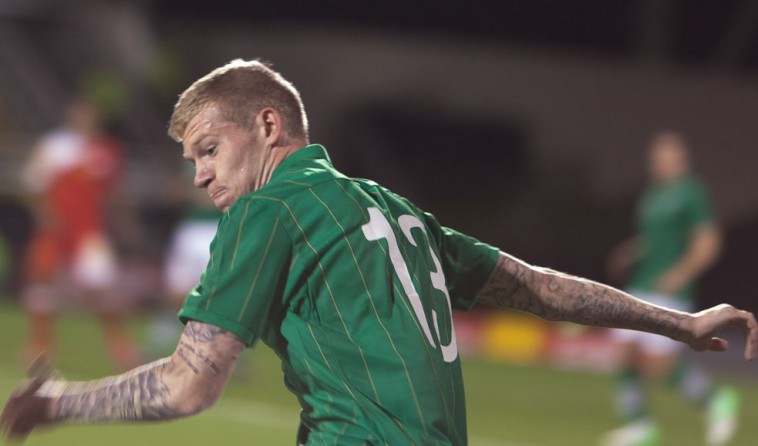 James McClean’s superb second half goal handed the boys in a green a famous 1-0 win in Wales, crushing the hosts’ hopes of qualifying for Russia in the process.

After nine Group D fixtures and 13 months, it all came down to Cardiff.

Both teams entered the game needing a win, with Wales holding a slender one point advantage over the boys in green in the Group D table.

Wales made the brighter start at the Cardiff City stadium, and Ireland once again struggled to retain possession under pressure from the hosts. Ireland were being outplayed but not outfought, and certainly imposed themselves physically on Chris Coleman’s side.

Shane Duffy produced arguably his best performances at international level with a dominant performance at the heart of a dogged Irish defence, and David Meyler further cemented his place in the middle of the park with another leader’s performance.

It was a huge team effort, and one that paid off.

Randolph – who was excellent again – had to tip Ramsey’s fierce drive over the crossbar in the first half, but Wales were otherwise reduced to half-chances and speculative corners.

Joe Allen was pulling the strings in midfield until he was forced off through concussion, as a result of being sandwiched between James McClean and David Meyler.

Ireland did not create many chances in the first half, but Jeff Hendrick could have done better with a snapshot in the box following some hesitant Wales defending under a high ball, and Duffy saw his low drive drift wide of the far post just after the half hour mark.

Robbie Brady testedÂ  Wayne Hennessy at his near post before the break, but it was a comfortable save for the Wales ‘keeper.

James Chester’s header found the side netting in the 51st minute, and Hal Robson-Kanu forced Randolph into a smart save with another header just two minutes later.

However, it was Ireland who broke the deadlock after a sloppy mistake by the usually reliable Welsh captain Ashley Williams.

He was dispossessed by the industrious Jeff Hendrick, who burst down the line and swung in a low cross across the box.

Harry Arter showed wonderful awareness to produce a clever dummy, and James McClean buried the bouncing ball into the bottom corner with a right-footed half-volley from 12 yards to send the typically noisy away fans into raptures.

James McClean, you absolute dancer. How about that step over from Harry Arter?!? #WALIRL #RTEsoccer pic.twitter.com/75hDzigE9L

Ireland had to hold out for another 38 minutes (including five minutes of stoppage time), and offered a below-par Wales side no avenue back into the match.

Glenn Whelan and Kevin Long came on in the closing stages to see out the game, and the Irish dug deep to hold on for a massive victory, which resulted Wales’ first home defeat since 2014.

“We knew it would be hard, but when it comes down to one game, the spirit in this group, we can do anything,” an emotional Jeff Hendrick claimed afterwards.

According to RTÃ‰ Sport, the draw for the play-offs will be held on October 17th, with the games taking place over two nights in November, betweenÂ 9-11 and 12-14.

Ireland will be unseeded in the draw (based on FIFA rankings), and will likely face one of Croatia, Italy, Denmark, or Portugal/Switzerland.