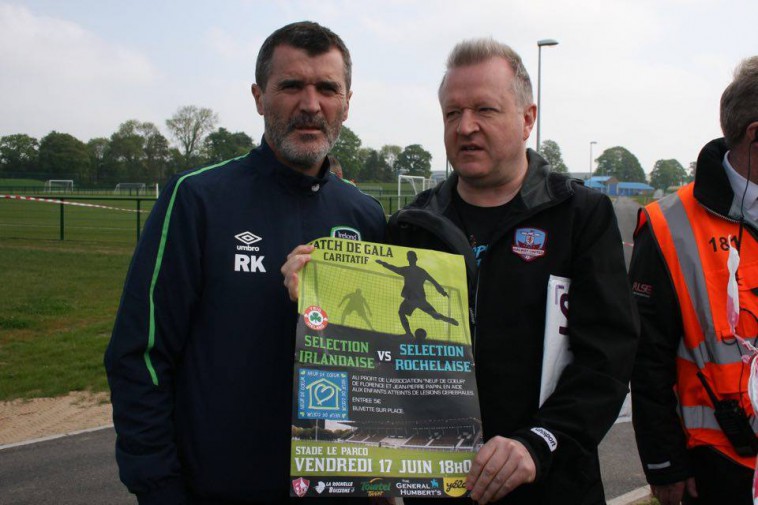 Roy Keane and Tommy Shields promote match
Thousands of Irish supporters are expected to attend at charity match between Irish and France fans in the coastal town of La Rochelle with proceeds going to charities associated with European Cup winner Jean Pierre Papin and Irish reporter, Carl Oâ€™Malley, who passed away suddenly while playing for his Astro-league team last year.
The game which takes place at the Stade Le Parco at 6pm on Friday, June 17th, is being organised under the auspices of YouBoysInGreen (YBIG) the Irish supporters group that provides travelling fans with information and support around trips away for Republic of Ireland internationals.
It is the latest in a long line of such matches and organisers hope to beat the attendance of 3,000 at their Euro2012 game in Torun. With large numbers of Irish due to be based in La Rochelle, the organisers hope to attract a record crowd for a YBIG game. Admission costs â‚¬5 which includes a shuttle bus from the centre of town. 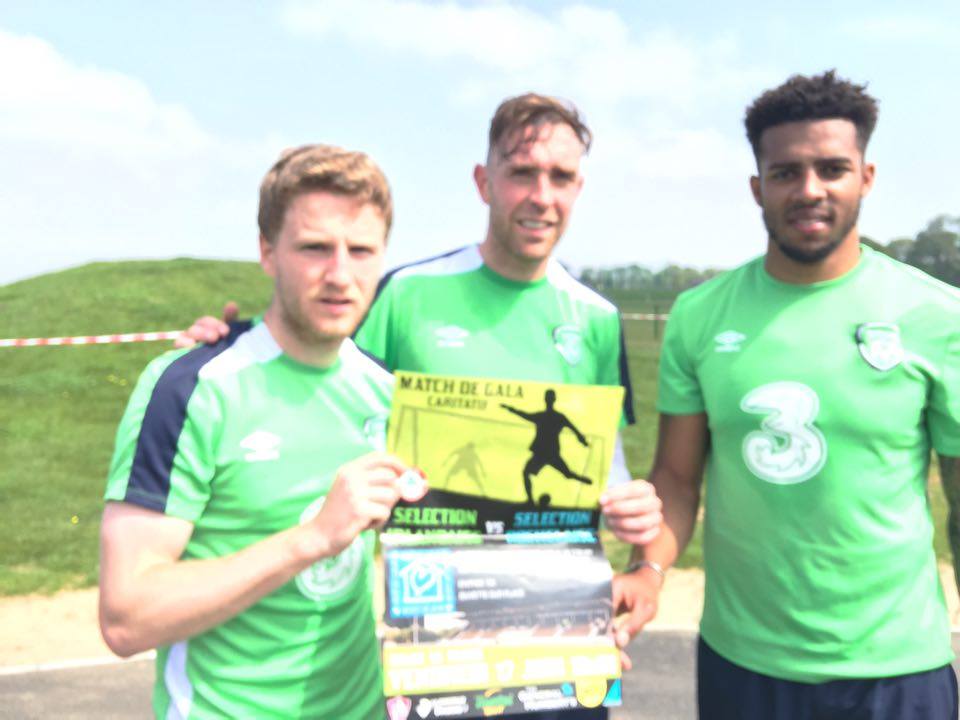 The teams have already been picked with Irelandâ€™s side drawn from supporters who signed up over the past few months. Every member of the squad has paid to play and they will receive a specially designed commemorative jersey.
All of the money raised will be split between Neuf de Coeur (Nine of Hearts) a charity established from former Marseille, Milan and France star Papin after his daughter Emily was diagnosed with cerebral lesions at just eight months old and the Carl Oâ€™Malley Education Trust, a fund created to provide for the education of the three young children of the Irish Times journalist who died so suddenly a little over a year ago.
The match is the highlight of a week-long festival of events that also includes concerts by Irish and France bands as well tours of the region. The programme is being organised by the Saint Nicholas Quarter, a group local of business people, especially retailers, with Nicolas Bourdel of the General Humbert (an Irish bar in the town named in honour of the French commander, Jean Joseph Humbert who led separate expeditionary forces to Ireland in 1796 and 1798 and in the latter instance, briefly declared a Republic of Connacht after initial military success at the battle of Castlebar).
â€œThis is a fantastic initiative and sounds like it will be a great day for everyone involved. One of the greatest things about international football is the way it can bring supporters from different countries together but after that it takes someone to take the next step in order to establish lasting relationships,” said former Ireland international Kevin Kilbane.
“I think YBIG and everybody else involved in this game, and the wider festival, deserve huge credit for their work. That the money being raised is going to two such worthy causes only makes the whole better. I wish them ever success with it and for once, let me be the one to say: â€œCâ€™mon you Boys in Green!â€
Nicolas Bourdel from The General Humbert added:Â “It is now sixÂ months that my brother and I closely work with Tommy Shields to prepare the visit and stay in La Rochelle of the Euro 2016 Irish fans.
“Now that there are only a few days to go before their arrival… excitement is at fever pitch! During six days, La Rochelle and our Saint Nicolas Quarter will live and vibrate to the Irish rhythm! Good craic is on the way! We are really looking forward to it!”
Tommy Shields, who has put countless hours into organising the match, added:Â â€œWe try to get a game in around every game really if we can and we look to raise a few quid wherever we can too. Itâ€™s been going on now for about seven years and weâ€™re hoping that this will be the biggest one yet.
“The original connection with Nicolas and The General Humbert was made via Facebook but it turned out that he knew Seamus McGettigan of the The Dail Bar in Galway and so he got in touch then came over here later. Itâ€™s down to him that this even is shaping up to be such a success. Itâ€™s gone from being just a game to a being a full blown week.
“For YBIG itâ€™s just another way of bringing people together on the trips. Itâ€™s all about fun and friendship through football. YBIG, through its forums on the website (YBIG.ie) lets people know what people are doing, how they are getting somewhere and where they are meeting up when they get there.
“This just seems like an obvious next step. Torun in Poland four years ago was massive and this looks like being even bigger.”
Following the match, Irish trad ban Catalpa will provide the entertainment so it should be a busy night for Phelim Warren – he manages the Ireland team and also sings with the band!
Kieran Oâ€™Donoghue (Nenagh)
Damien Ryan (Clifden)
Mark Beumont (Athlone)
Ciaran Kiveney (Athlone)
Eoin Oâ€™Flaherty (Athlone)
Joe McCormaic (Athlone)
Patrick Flaherty (Galway)
Lewis Brien (Galway)
Francis Creaven (Tuam)
Patrick Lynn (Waterford)
John Oâ€™Neill (Waterford)
Alan Forrestal (Waterford)
Ross Zambra (Dun Laoghaire)
Colin McKenna (Nenagh)
Ian Campbell (Rathcoole)
Shane McNamara (Galway)
William Condon (Galway)
Mick Donnelly (Galway)
Aidan Kelly (Omagh)
John Oâ€™Connor (Galway)
Barry Donovan (Galway).
Manager Phelim Warren.
4
SHARES
FacebookTwitter
SubscribePinterestGoogle 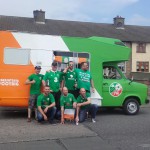