Only Jeff Hendrick and James McClean retained their places from Irelandâ€™s 0-0 draw with Wales on Friday, with John Egan and Conor Hourihane all being handed their international debuts.

Hordur Bjorgvin Magnusson’s 22nd minute free kick was the difference between the sides, after John Egan was shown a yellow card for a foul just outside the box.

Bristol City midfielder Magnusson curled the set piece over the Irish wall and past Kieran Westwood to inflict Irelandâ€™s first home defeat since 2014.

The boys in green looked disjointed and lacked creativity, and Iceland deserved their first half lead on the balance of play. Ireland played at a better pace after the break, but still looked blunt in attack.

Hourihane looked busy in the middle, but could have done better in the wall for Magnusson’s free kick, and Egan showed his inexperience by conceding a foul in a dangerous area in the first place.

Kevin Doyle was given a rare opportunity up front, but Ireland created few chances throughout the contest, and were often restricted to speculative crosses from either flank.

The Irish striker probably had the best chance of the game – though it was a half chance at best – when his header from a James McClean cross flashed wide.

Daryl Horgan and Andy Boyle were introduced for their international debuts in the second half, much to the delight of the 37,000 strong crowd at the Aviva.

Shane Long, Callum O’Dowda, and Eunan O’Kane were also introduced from the bench, but couldn’t inspire a comeback against a well organised Icelandic defence.

“First half, we didnâ€™t do well at all,” the Irish boss said.

“We were better in the second half but creating some clear-cut chances is something that we have to do better.

â€œTonight will be great for some of the players to know what it is like to step out there and play international football.

â€œHorgan, coming on, did really fine, caused problems, put in great balls but unfortunately we were not able to put the ball in the back of the net. Horgan should be pretty pleased with his contribution.

â€œWe lost the game but there are positives to come out of it.” 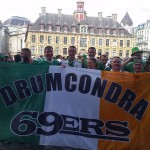