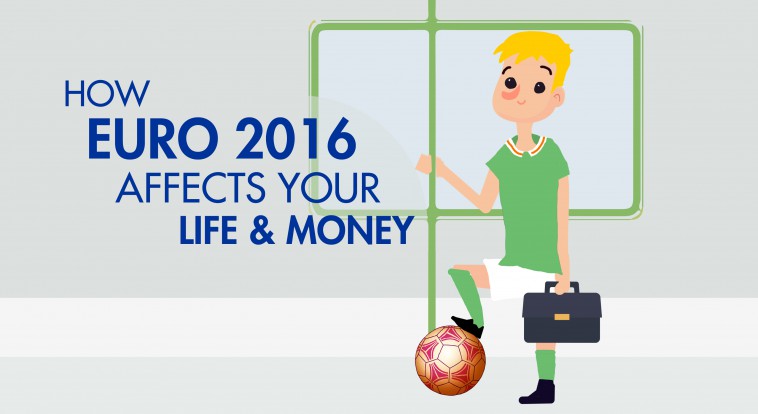 Now if you are in France then you’ll know exactly how the Euros is affecting your hard earned loot and with the price of a pint in Paris a mind numbingly expensive â‚¬9 (and that’s a cheap pint), you’ll probably be avoiding anything that reminds you to check the bank statements when the Euro party is over.

For the rest of the country Zurich Life have conducted a great little study on how the Euros can impact your finances.

The baby boom: When Iniesta scored the winner against Chelsea in 2009 Champions League Semi Final, birth rates increased by 16.9% in Barcelona referred to as the “Iniesta Boom”. Will there be a ‘Wes Boom’ in 9 months time? -Now that’s gonna be expensive.

Football during business hours: Euros affects work productivity (no shit!) In 2010 when the World Cup was in full swing if a nations national team was playing then that nations stock market trade numbers dropped 45% more than normal Market activity was significantly below average right before a soccer match in 2010 and continued to be lower 45 minutes after the match had ended

Supporting the neighbors or willing them on to lose badly: The Republic of Ireland’s opening match in Euro 2012 vs Croatia was watched by a record 2 million people. In 2014 only 859,000 Irish viewers tuned in to watch Germany vs Argentina for the championship (Ireland was not in the final match) Irelandâ€™s three group games will drive a total spend per person of â‚¬243 If every person watches one more group game in the pub of a neighbouring team, thatâ€™ll bring the total to â‚¬324, an increased spend of 33%. A big cheer from the Vintners Federation can be heard across Ireland.

How many goals can make a difference: In 2014 when Germany beat Brazil 7-1, when it was 5-0 Germany the people in the stands started anti-government chants towards Germany. Vandalism broke out in Sao Paulo the following days of the match. Brazil’s stock market took a hit from July 7th-July 9th 2014. Jesus what could happen in Ireland if we lost to England in a Semi Final? – shudders.

The feel good factor: When the Irish team went to the quarter final in 1990 the entirety of Ireland got behind the team. Pubs all across Ireland were to full capacity. Street flag waving became a national past time. If this team can reach the 1/4 finals – all that money we have spent following the team will translate into a better economic situation, so go out and do your bit for your country.

Check out the full story on Breaking News here.