The boys in green will take on Denmark in Copenhagen on November 11th, before hosting the Danes in Dublin three days later.Â There are few surprises in the squad, which will be trimmed to around 25 players closer to the trip to Denmark.

James McCarthy is included after making his Everton comeback on Wednesday, but Jon Walters has been ruled out through injury, and Seamus Coleman remains sidelined.

“Jon is making good progress,” said O’Neill of Walters.Â “I have spoken to him and he’s coming on well, and maybe if things change for the lad over the next ten days, he could still come in if he continues to improve fitness-wise.”

O’Neill also said the return of McCarthy is good news for Ireland.

“I was at the game,” he stated. “It’s good for him. He hasn’t payed in some time.Â He got through that last night.

“That’s encouraging. He seemed to be alright and that’s good news for us.”

Wolves defender Matt Doherty – a regular fixture for the Championship high-fliers – has also been included, and O’Neill singled out the full back for praise.
“Matt is playing a right wing-back role for Wolves and it seems to suit him. I haven’t forgotten them.”
David Meyler will miss the first leg through suspension, while several of his international teammates are a single booking away from suspension.
Republic of Ireland provisional squad 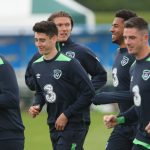