While the Ireland team is not flush with players at the top tier of English football anymore, it’s not fair to say that we don’t have many excellent players at good clubs. Last season Matt Doherty was outstanding again for Wolves, who finished 7th and reached the quarter finals of the Europa League.

John Egan was superb for the newly promoted Sheffield United, a team many expected to be relegated and in fact had a small chance of finishing in the top 4 when the covid interrupted season resumed. Egan’s left wing back Enda Stevens was equally impressive for the Blades.

Now, we look to two Irish players of the Premier League who have something to prove, needing to grab the 2020/21 season with both hands. One was once in the conversation for the best right-back in England, while the other has just completed a somewhat risky move to a club that ranked below him last season.

Hendrick brought to the north-east to stave off relegation

Burnley manager Sean Dyche has always been very particular in his recruiting process, demanding players of good character, mental toughness, and a high work rate. So, when Jeff Hendrick hit the open market this summer, the Irish midfield had many suitors. Somewhat strangely, Hendrick opted to sign for Newcastle United, a club which finished three places and ten points below tenth-placed Burnley.

Hendrick joins a tricky situation at St James’ Park, with the team being a relegation candidate for the last few seasons, primarily due to uncertainties under Mike Ashley and his willingness to sell the club. This year, they’re third favourites to go down, even with Hendrick joining the side, with their odds of 9/4 to drop being a popular choice of one of Ireland’s best bookmakers’ offers of bet €10, get €30. They’re predicted to be in a relegation scrap with Fulham, West Brom, Burnley and Aston Villa.

In a challenging market to manoeuvre this summer, free agent Hendrick was a substantial coup for the Magpies. While the St Kevin’s Boys trainee has scored some superb goals over the years. The versatile midfielder is expected to slot in either in a two-person midfield or on the right side in a 4-3-3 system, with the hope being that the athleticism and technical abilities and eye for a goal will help them avoid the drop and Ashley find a buyer. Hendrick had a great start scoring a goal in Newcastle’s first game a 2-0 away win against West Ham, but the next home game was a 3-0 loss to Brighton, nothing’s ever certain with the Tynesiders.

Coleman needs to reassert his dominance

Since joining Everton in 2009 from Sligo Rovers for £60,000, Seamus Coleman now the captain of the club and entering the last two years of his five-year deal, following the infamous double-leg break, the 31-year-old again needs to prove himself this season having regained his place in the team after lockdown in June.

Last season with the club loaning in Djibril Sidibé to fight it out with Coleman for right back. And it could be argued that, Sidibé arguably played better than Coleman over the course of the season, even tallying more assists and a higher pass percentage than the Donegal native. Sidibé returned to AS Monaco over the summer, with Coleman’s primary competition now looking to be Jonjoe Kenny.

Out on loan last season, academy graduate Kenny impressed in the Bundesliga, cementing himself as Schalke 04’s first-choice right back. He only missed three league matches, two for injury and one for a suspension, rarely being subbed-off in his 34 games. The Liverpudlian rewarded the German outfit with two goals, three assists, and an average of 2.4 clearances and 1.6 tackles per game.

Still only 23 years old, Everton denied Schalke 04 a second season of the right-back on-loan. While Sidibé was a World Cup-winning competitor to Coleman’s place, if local lad Kenny puts in a good show, there’ll be pressure on Ancelotti to keep him in the team. So, Coleman needs to be on top of his game to keep his Everton place.

Everton have had the perfect start winning all four games this season. Kenny, has played in both league cup games, 3-0 win over Salford and a 2-5 win against Fleetwood Town. While Coleman has played both league games the 0-1 win away to Spurs and the 5-2 home win v West Brom. Agood headache to have if your Ancelotti, Ireland fans will be hoping the youngster can wait another season or two. 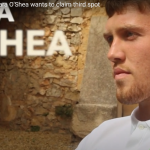